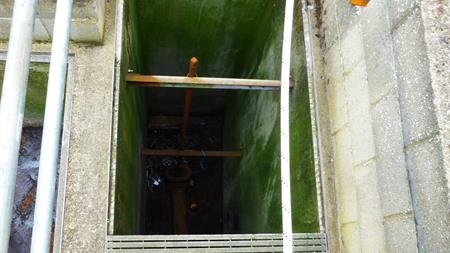 Michael Jennings sustained whole-body burns when the angle grinder he was using to cut corroded bolts on a stop valve at the foot of a dry well, created sparks which showered on to his overalls causing them to burst into flames. Jennings managed to climb out but died in hospital from his injuries two days later. A colleague, who helped him escape, sustained minor burns to his hands.

The two fitters had been called to Tadcaster Sewage Treatment Works on 20 July 2015 to replace a corroded stop valve on the end of a drain pipe, which emerged from the end of the disused three-chamber (digester) lane 1 into a 3 m deep dry well.

The regional water authority had built the trade waste plant in the 1980s with two adjoining, three-chamber lanes for treating effluent from the town's three famous breweries: The Tower Brewery, John Smith's and Samuel Smith's Old Brewery. In 2008, two breweries stopped sending liquid waste and lane 1 was taken out of service.

Before this happened, Yorkshire Water Services upgraded the treatment process and introduced an oxygen injection system using submerged pumps. However, when pumps in the active lane deteriorated, the water authority decided to recover some from the disused lane as spares.

HSE inspector John Micklethwaite told IOSH Magazine that when workers were preparing to retrieve the pumps in September 2014, one of the fitter's gas detection monitors was triggered showing high oxygen levels in the disused lane 1. The project leader alerted local managers and the incident was logged as a near-miss on the company's networked safety system, Safeguard.

Fitters had also identified a problem with the six-inch valve bolted on to the end of the drain pipe, which emerged into the bottom of the dry well and appeared to have seized. In June 2015, fitters managed to force the valve open but were unable to close it entirely, so set up a job to replace it on 20 July.

Micklethwaite said the water authority had extensive procedures, including ones for confined space work. These included a point-of-work risk assessment, method statements, and a permit to work system. However, a catalogue of failures led to the fatality.

The two fitters and the senior operator, who had only been in post for five-six weeks, were unfamiliar with the plant, which was the water authority's only treatment works using oxygen enrichment. The fitters failed to identify the hazard on the method statement, and it was not specified in the permit to work issued by the senior operator.

Micklethwaite said: "Another factor was that, although the fitters knew the bolts would be corroded, they didn't flag up the possibility that they might need to use power tools and an angle grinder."

After attempting to dislodge the valve bolts with spanners, a monkey wrench and a hammer and chisel, Jennings asked his colleague to pass down his battery-powered angle grinder.

"At this point, the two fitters were proposing to carry out hot work, so they should have stopped the job and gone back to the permit issuer," Micklethwaite said. "The permit then should have been amended or reissued but that didn't happen."

While he was working the valve, Jennings managed to open it about half way. The investigation concluded that from this point onwards the bottom of the well began to fill with oxygen enriched air from the adjoining lane 1, but this was not detected initially.

"A gas monitor was suspended in the dry well but only at head height," said the inspector. "As Jennings was using the angle grinder, sparks impinged on his clothing, which went up like a torch."

When the gas monitor's data was downloaded, the HSE found that one gas alarm which had exceeded the safe level had been activated, but Jennings had failed to leave the well.

When the HSE brought its prosecution, it argued that the near-miss review was a significant factor in the company's overall failing. However, at the trial at Leeds Crown Court, where Yorkshire Water Services pleaded guilty to breaching s 2(1) of the Health and Safety at Work Act, Judge Penelope Belcher said that the conclusions drawn by the manager in reviewing the near-miss were incorrect but that the water authority had not been negligent. She didn't consider it to be a major factor in assessing culpability.

As a result, Judge Belcher determined that the regional water authority's culpability was medium. She agreed with Yorkshire Water Services, which has a turnover of about £1bn, that a series of unforeseeable events took place leading up to the fatality and decided on harm category 2. In setting a fine, she started at £1.2m but deducted £100,000 to account for the company's excellent safety record and remedial measures. She reduced it further by a third to account for its guilty plea and ordered it to pay also £18,818 costs.