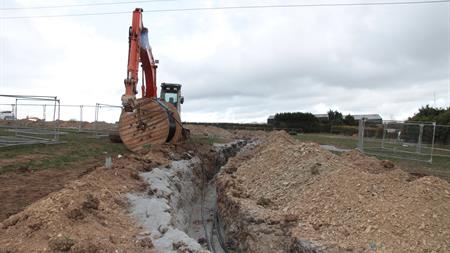 Following the prosecution of British Solar Renewables (BSR) and Pascon earlier this month, IOSH Magazine has been told that Ashley Coe was working on the ground for much of the installation, helping to feed cables into trenches. He later swapped roles with a colleague and controlled the excavator for the first time since work started at the site. The arm of the excavator came into (close) contact with the overhead power line soon after, shocking Coe and two other workers.

The excavator was being used at the greenfield site to suspend a 2.2-tonne cable reel, though its safe working load was only 2 tonnes. Workers guided the cable into purpose-built trenches as the excavator reversed, gradually releasing the cable from the reel. Health and Safety Executive (HSE) inspector James Lucas said was the process was like "tug of war".

"We would not expect to see people working so close to an excavator. There should have been an exclusion zone around it because someone could be run over or struck by the arm," Lucas said. "It was an inappropriate piece of working equipment. Instead, they could have used a tractor and trailer with an electric winch which wouldn't have been able to strike the overhead power lines."

It is not clear whether the arm of the excavator physically touched the overhead cables or whether it came into close proximity with them, causing electricity to arc.

Principle contractor BSR was fined £250,000 after being found guilty of breaching Regulation 34(2) of the Construction (Design and Management) Regulations (CDM) 2007. According to Lucas, the company had failed to set up the site in accordance with GS6 -- HSE guidance on how to safely work underneath overhead power lines -- and ignored advice from electricity distribution network operator Western Power Distribution (WPD).

"When BSR applied to build the site and prior to work starting, they wrote to WPD asking for either the power to be switched off or permission to work underneath the power lines," he said. "WPD couldn't just switch them off and told BSR that, in order to work underneath them, they needed to be in line with GS6. So the risk had been highlighted to them."

"The sentencing was on the basis that BSR were a larger company," explained Lucas. He said that, though the new sentencing guidelines for safety and health offences don't come into effect until February, "they are in the public domain and there's nothing to suggest a judge couldn't be aware of them moving forwards. That was a subject very heavily debated in court."

Coe and another worker were both holding chains connected to the excavator's arm when the charge struck. A third worker rugby tackled both men to the floor to stop the current running through them. Coe was second to be knocked from the machinery so his injuries were more severe; the two other men were not seriously hurt.

"According to witness statements, there was so much power running through the arm of the excavator and through Ashley that his steel toe caps were sparking," said Lucas.