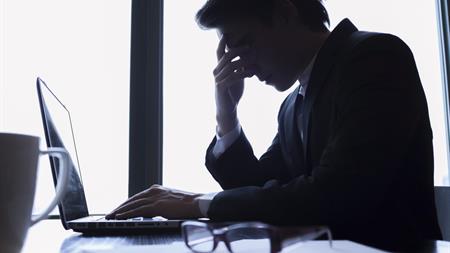 In the 11th biennial TUC survey of more than 1,000 UK safety representatives, 70% cited stress as the main hazard of concern to workers, especially for employees in the public sector most affected by government cuts. This was up 3% from the last survey in 2014 and a higher proportion than in any previous TUC study.

The problem has increased across all UK regions and countries. Northern Ireland was most affected, with a 13% rise to 78% over the last two years in the number of safety reps who identified stress as the number one problem. Other areas that registered significant jumps were the north of England (up by 11% to 78%) and Scotland (up by 8% to 74%).

The top three professions which registered stress as a key issue in the workplace were central government (93%), education (89%) and health services (82%).

Stress is "always the most widespread concern", according to the TUC. The hazard that has seen the largest percentage point increase, however, is violence and threats. The proportion of safety reps saying this was one of their main problems rose from 19% in 2014 to 24% now.

In addition to stress, other prevalent hazards were bullying/harassment, overwork, back strains and long hours at work.

Bullying/harassment and overwork were top five concerns for 48% and 40% of safety reps respectively, up 2% and 4% from two years ago. The linked problem of working long hours has also been growing rapidly over the last few years; it is now a main worry for 30% of respondents compared with 26% in 2014.

TUC general secretary Frances O'Grady said: "The message from the shop floor is clear: stress is becoming a bigger and bigger problem. Pressures of long working hours and low job security are being felt in workplaces across the UK.

"It's in no one's interests to have overstretched workforces. People who experience high anxiety are less productive and are more likely to take time off. Stress is preventable if staff have reasonable workloads, supportive managers and a workplace free from violence, bullying and harassment."

In similar news, research from consultancy Capita Employee Benefits has revealed that three-quarters of employees felt stressed at work in the last 12 months. The Employee Insight Report, which is based on interviews with over 3,000 workers, also found that only 20% took time off because of stress.

The report said a "worrying" 36% knew coworkers that had complained of being stressed but their employers did not do anything to help. Almost half (44%) knew a colleague who had given up work due to stress.

A third of workers would like their employer to provide wearable technology to help them monitor their health.

Alistair Dornan, head of health management at Capita Employee Benefits, said: "Our research reveals that a significant proportion of the UK's working population believes employers have a responsibility towards the personal health and mental wellbeing of their staff. And yet many workers are still uncomfortable speaking to their bosses about mental health, while a worrying quarter of the population say they have complained but nothing was done."