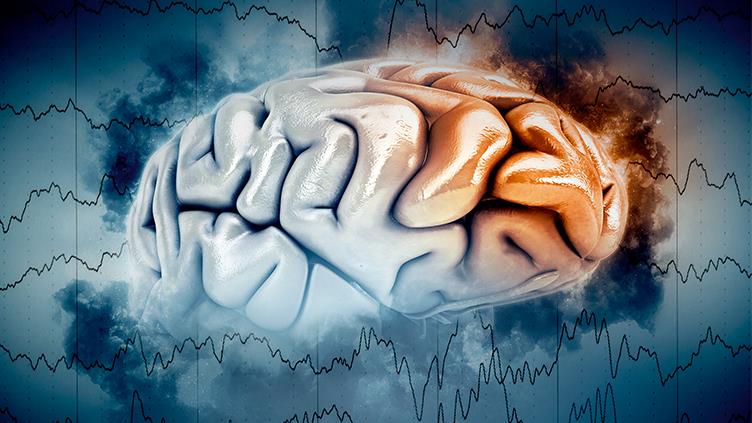 Epilepsy is one of the most common long-term ill-health conditions in the workplace. It affects one person in every 100. Since one in four people diagnosed is over the age of 65, the number of employees with epilepsy is expected to increase as people work for longer.

There are more than 40 types of epileptic seizure; some pass in seconds while others can last minutes. Some people lose consciousness, fall down and make jerking movements (a "tonic-clonic" or convulsive seizure), others become vacant (an absence seizure) or have seizures only in their sleep. Some people receive warnings that seizures are about to occur -- an "aura", commonly the perception of a strange light, an unpleasant smell, or confusing thoughts -- but many do not.

About 70% of people with epilepsy have no seizures when on medication to control the condition, while others experience them under specific conditions. For example, 4% of those affected have photosensitive epilepsy, triggered by flashing or flickering lights. Other triggers include tiredness, stress or skipping meals. In some cases, the medication may cause side-effects, such as drowsiness or poor concentration that undermine the person's work performance.

The upshot is that there is no off-the-shelf solution. OSH practitioners should carry out a risk assessment adapted to the nature of the person's epilepsy, the demands of the job and the working environment. They should review the assessment periodically in case the condition changes over time. 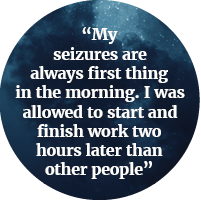 According to Michele Jarvis, a safety, health and incident investigation consultant at Lupus Consilium, who herself had epilepsy as a child, there are three key questions practitioners should ask staff who present with the condition. First, what are their triggers? If the employee has photosensitive epilepsy, say, it is important to maintain strip lights to prevent flicker and fix them immediately if they do. For an employee who has absence seizures, heat may be the problem.

Second, do they drive? If a driver in the UK has any kind of seizure, they must tell the Driver and Vehicle Licensing Agency and usually surrender their driving licence. Once a doctor confirms they are fit to drive again, they can apply for a new one-to five-year licence. People who are seizure-free may have a full driving licence. If an employee has had to surrender their licence, this generally indicates they should not carry out high-risk work such as operating machinery until the seizures are under control. However, if they are allowed to drive a car, there are likely to be few jobs they cannot do. To drive a heavy or large goods vehicle, an employee must be free from seizures for ten years without treatment.

Third, if an employee does have seizures, what is their normal recovery or care plan? "Some may be able to carry on after a break and a cup of tea," Jarvis says. "Others may need to sleep and have the rest of the day off." So it may be enough for the employer to provide a quiet place to rest after a seizure or it may need to draw up a plan setting out how the employee will travel home, who will accompany them if necessary, and family contacts.

Most seizures should not require medical intervention.

"Once somebody's been diagnosed, the likelihood of them needing hospital is very low," Jarvis says, "so you won't need to phone an ambulance unless something doesn't seem right -- and that's one reason why you need to know what the care plan is."

According to the Epilepsy Society, an ambulance is usually needed only if an employee has badly injured themselves during a seizure, convulsions last for two minutes longer than their care plan says is usual, one seizure immediately follows another with no recovery in between, or the person has never had one before. The society has produced a free smartphone app and leaflet, both containing information for first aiders on what to do if someone has a seizure (bit.ly/2nMOsUE).

Jarvis points out that, although it is useful to know whether the person takes medication, this should not present a barrier to working. "A lot of people take medication but a lot don't because the epilepsy is not that serious or regular, or they found their trigger years ago. So don't panic if somebody's not on medication and don't panic if they are because either way it's managed for that person."

The risk assessment should be used to decide what changes to make, if any, to comply with the organisation's duty to ensure the employee can work without putting themselves or others at risk. Depending on the type and severity of the condition, measures might include:

Sometimes, adjustments may be only temporary. For example, an employee may benefit from working from home while changing their medication. 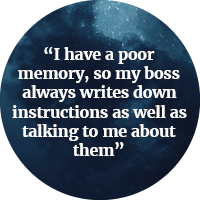 It's important to consider whether extra "reasonable adjustments" are necessary to avoid disability discrimination claims. For example, you may need to grant time off for medical appointments and allow more sickness absence before invoking disciplinary procedures.

It may be that no safety adjustments are needed, or only minor ones, because the employee's seizures are controlled by medication, no triggers are present or no one would be harmed if they did have an episode. A Trades Union Congress guide, Epilepsy in the Workplace, highlights several examples of people who were needlessly barred from doing a particular job on OSH grounds, each of which could have led to a discrimination claim. One was told he could not work with computers despite not having photosensitive epilepsy, while another was not allowed to work with children, though her seizures would occur only about once a year in her sleep. The guide also includes specific examples of adjustments that employees say have helped them to continue working (see quotes throughout this feature).

Even if workers do have photosensitive epilepsy, the advent of LED screens has diminished the risk of computer work triggering a seizure. These contrast with older cathode ray tube screens, which used to refresh the picture at a rate that could be unmanageable for people with epilepsy. However, a small risk may still be posed by rapidly changing images, contrasting or moving patterns, or content that shows flashing or flickering lights. Remedies include lowering the screen brightness, ensuring the office is well lit or keeping a lamp switched on close to the screen, and allowing frequent rest breaks.

If an employee has surrendered their licence, they should not carry out high-risk work until the seizures are back under control

One safety practitioner told IOSH Magazine about recent advice he had given to an electrical equipment manufacturer that had an employee with photosensitive epilepsy: "They set up a new test bay where very high voltages will be applied to products before dispatch. To alert staff when these high voltages are present, they installed an orange flashing strobe with very piercing, short, sharp flashes. The employee in question is office-based and seldom has to go down to the shop floor, but does have to on occasions.

"So I have recommended that the strobe light be removed and, at the two points of entry to the test bay, a warning sign should light up at the appropriate time displaying the text 'High voltages present'." 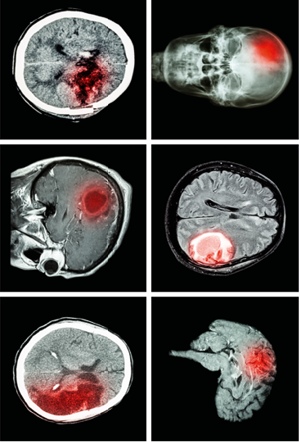 Since the employee is a woman, he also recommended training some female first aiders and ensuring they knew how to respond if she had a seizure.

Mark Charles of consultancy the Health and Safety Advisory Service has recently advised a client about a warehouse worker who developed epilepsy in his early 60s. The man, whose job included making minor repairs to equipment had five absence seizures in one month last year with no apparent trigger. He now takes medication but "a tremor in his right hand and arm has developed and it is unclear whether this is caused by the seizures, by the medication" or by a separate medical condition.

"He is currently frail and the tremors prevent him from doing any manual work", Charles says. "He also has difficulty with short-term memory retention and loses concentration."

Because of the tremors, Charles recommended that the employee should no longer use tools such as screwdrivers, knives and soldering irons or be required to pack or unpack equipment. This work is now done by a colleague, while the employee has been moved to computer work, which he can do with his left hand. "So we've adapted the routines of two people to accommodate his needs," says Charles. 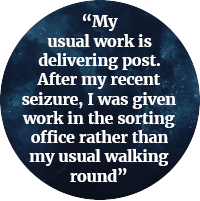 When the worker was on the full dose of medication, Charles reviewed the risk assessment and found that, though the seizures had stopped, his tremors and co-ordination difficulties had worsened.

"Balance when walking can regularly be a problem as he has developed a tendency to misjudge footing and walk sideways," he says. The employee works on the ground floor and he now phones a colleague in the first floor office to collect documents so that he does not have to use the stairs. His driving licence has been suspended and he takes the bus to work. But the nearest stop is 2.4 km away so the employer has arranged for a colleague to meet him there in the morning and drop him off in the afternoon.

An employee in the UK is likely to be classed as disabled under the Equality Act 2010 if they have epilepsy that has a substantial effect on their day-to-day activities or would have a substantial effect if they were not on medication. If their epilepsy is not causing problems and requires no medicine but could be triggered by specific situations, they are still likely to be covered. 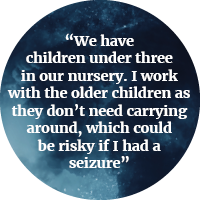 In one employment tribunal case, an employee with 31 years' service was dismissed after collapsing during a seizure in a factory where there was hot metal and forging hammers. Though the employer had been concerned he might be a danger to himself and others, the tribunal ruled the dismissal was unfair. The employer's medical adviser was inadequately qualified and had not given the employee any time to see whether the seizure recurred in this form.

The case highlights the difficult balancing act employers face when trying to comply with apparently competing duties under health and safety and employment law. Expert health and safety advice is important to establish what tasks the employee can still do, while HR needs to be consulted, along with any occupational health advisers.