Work at height: Relearning the ropes 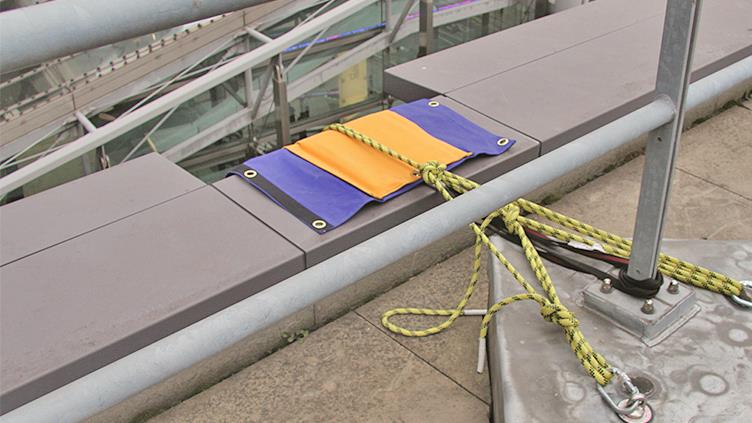 Changes in rope access codes have unwittingly caused a problem for everyone who is involved in rope work that relies on anchor points: building owners, facilities managers, rope access technicians, or manufacturers, installers and examiners of such systems.

In recent years, rope access has become established as a well-accepted, cost effective and, above all, safe means of gaining access to parts of structures that would be awkward and expensive to reach by other means.

It is such a well-accepted technique due partly to the excellent safety record this specialised industry has achieved. Efforts to raise standards have been led by the Industrial Rope Access Trade Association (IRATA International), whose experts have developed the standards to which the industry works. These standards are:

These codes, which share their core guidance, have, since the 2002 edition of BS 7985, included some fundamental recommendations about rigging to anchors: 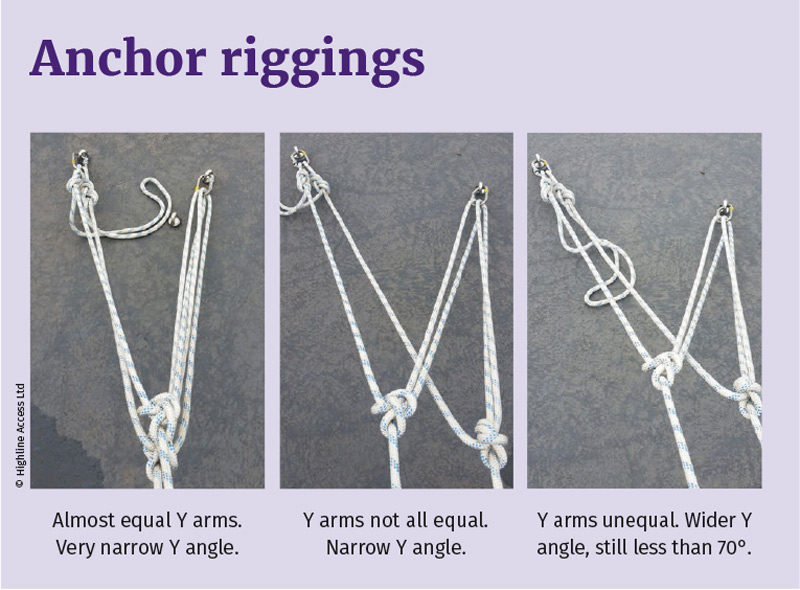 This dilemma was first addressed in BS 7883:2005, the code for the installation, use and maintenance of anchor devices, which, in its Annex C, states: "Where for instance, Class A1 anchor devices conforming to BS EN 795 are considered for use in rope access, a combination of two or more such anchor devices is deemed to be in accordance with the recommendations given in BS 7985. To avoid the need to employ four eyebolts, it is acceptable for both the working line and the safety line to be connected to the same two Class A1 anchor devices."

The 2009 edition of BS 7985 endorsed this approach, which assumed that the eyebolts could be rigged in a Y hang so both were loaded equally. But because this assumption is demonstrably not always true, the 2013 edition, in common with the IRATA ICOP:2013, recommends that each has a static strength of 15 kN, even where equal loading is arranged.

The BSI committee responsible for fall protection (PH/05) recognised that this incongruity presented stakeholders with a problem and in June 2016 it agreed a technical bulletin designed to clarify the situation. BSI's Technical Bulletin PH/5_16_0102 (bit.ly/2wh1AlF) instructs installers of new eyebolts, examiners of existing ones, building owners and users on how they can implement the new guidance in the codes.

It advises installers to use eyebolts rated to 15 kN if possible and, if not, to install 12 kN rated anchors in two pairs and rigged with Y hangs less than 70°.

These include that eyebolts can be rigged such that loading on each eyebolt is intended to be equal; Y hangs do not exceed 70°; examinations are carried out by people with thorough knowledge of rope access practices; and each eyebolt is suitably marked and labelled with a statement to the effect that it complies with BS 7985:2012, the IRATA ICOP and BSI's PH/5_16_0102. The photo (below) shows a set up that should satisfy these conditions.

The bulletin advises building owners they should ensure that all rope access eyebolts are assessed in line with its provisions and new instructions for use are drawn to the attention of users.

Users are advised to ensure that eyebolts they intend to use comply with the bulletin by looking for a label to that effect and if compliance is in doubt, not to use eyebolts. 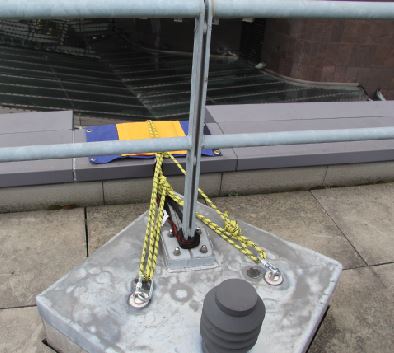 Anchor devices must be marked in accordance with EN 365. This requires anchors to be marked indelibly and permanently with BS EN 795, so an examiner can be sure they are for fall protection and, for traceability purposes, the manufacturer and batch number, or date of manufacture, should also be marked. Several anchors frequently used for rope access do not carry such marking either because they are intended by the manufacturer as intermediate anchors in lifeline systems or because when they were first put on the market the marking requirements were less onerous.

In many cases these anchors are more than up to the job; they just don't comply with the codes.

This writer knows of no anchor devices on the market that comply with the 15 kN strength of the codes in the manner recommended by the bulletin. Some manufacturers quote 15 kN or more but none has been able to confirm compliance with its provisions.

This means installers of new eyebolts have no option but to install two pairs of BS EN 795 anchors. Even that is not an easy option, as the bulletin suggests the eyebolts should be rated to 12 kN -- complying with the 2012 edition of BS EN 795. But most manufacturers have not tested their products to this edition preferring to rely on their 1997 compliance. (BSI has issued a technical bulletin stating that eyebolts complying with the 1997 edition may still be used in new installations.)

Few manufacturers have tested their eyebolts to the 2012 version because it does not cover the base material nor the anchor used to attach the eyebolt to it. This leaves installers with a limited choice of eyebolts with inadequate technical support.

Examiners of existing installations have the biggest problem as they frequently come across eyebolts that cannot comply in every respect. As none are rated to 15 kN and few are installed in sufficient numbers to offer users two pairs for each working location, examiners can either install additional eyebolts, always assuming they have enough space to do so, or try to justify them remaining in service on the grounds of equal loading.

What should those who are responsible for rope access anchors do? To ensure their anchor devices for rope access comply as far as is possible with the complex requirements and recommendations, building owners should ensure the periodic examination of fall protection systems is up to date and installations are checked against the expert recommendations -- especially BSI Technical Bulletin PH/5_16_0102 -- and this may well mean obtaining written confirmation from anchor device manufacturers that their products are fit for purpose for specific installations.