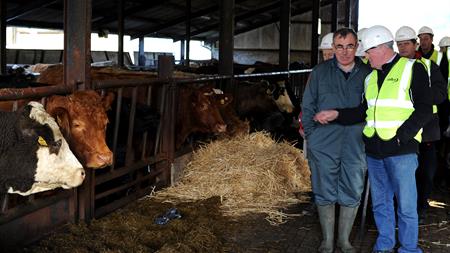 The Northern Ireland Branch of the Institution of Occupational Safety and Health (IOSH) wants its milestone year to help businesses take steps to prevent people being killed, injured or suffering ill health as a result of their work.

Twenty-three workers died in Northern Ireland in 2014/15, including nine people who were employed in the agriculture and five in construction.

Richard McIvor, Chair of IOSH Northern Ireland Branch, said that while inroads have been made over the last five decades to improve workplace safety and health across all industries in Northern Ireland, there remains work to do.

He said: "Our shared objective is a world where work is safe and healthy for every working person, every day.

"We want to empower organisations so they prioritise the safety, health and wellbeing of their workforce. Doing so is not only good for employees, but it is also good for business as it strengthens reputations, resilience and even results."

IOSH is currently raising awareness of the causes of occupational cancer through its No Time to Lose campaign. It tackles five of the most common factors associated with work-related cancer registrations and deaths in the UK -- asbestos, diesel engine exhaust fumes, silica dust, solar radiation and shift work.

Silica dust exposure in particular is an ongoing issue for workers in Northern Ireland, said Richard, especially for those working in construction, rail, highways and quarrying.

Richard said: "Around 900 people get lung cancer after breathing in silica dust at work in Britain each year. A further 800 people die annually from lung cancer caused by silica dust exposure in the workplace.

"Research by IOSH and the Construction Dust Partnership has found that there is generally poor awareness among construction workers of the risks that breathing in dust at work can pose to their health. Through No Time to Lose, we are showing employers and employees simple steps to start tackling this issue."

As part of its support for HSENI's Farm Safety Action Plan, the branch is funding demonstrations around the safe use and maintenance of chainsaws and quad bikes at this year's Balmoral Show in May.

IOSH Northern Ireland will be hosting a 50th anniversary dinner on 15 April at Belfast City Hall which IOSH members, non-members and anyone interested in workplace safety and health are welcome to attend.

For more information about booking a place or sponsorship at the event, visit www.iosh.co.uk/events, email [email protected] or call the IOSH Bookings team on +44 (0)116 257 3197. The deadline for bookings is 8 April.

Further details about IOSH and its No Time to Lose campaign can be found at www.iosh.co.uk and www.notimetolose.org.uk.