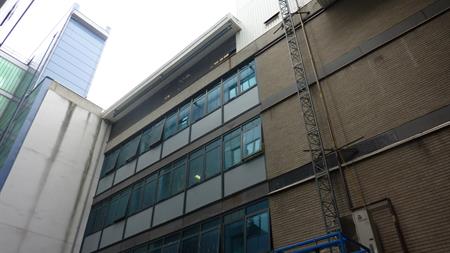 Christopher Rees, who was employed by W D Rees Maintenance, was cleaning windows at the women's unit of the University Hospital of Wales in Cardiff when the accident happened on 22 September 2016.
Cardiff Crown Court was told that he was using suspended access equipment when he fell from the end of the beam supporting him as there was no end stop fitted. He sustained significant life-changing injuries, including a broken back.
Wayne Daniel Rees, director of W D Rees Maintenance, was also sentenced after a Health and Safety Executive (HSE) investigation found work at height had not been properly planned.
It said the company had not risk-assessed the task nor implemented a safe system of work for cleaning windows, had made no arrangements to ensure the work was effectively supervised and had failed to provide safe equipment. In addition, there was no suitable rescue plan.
The investigation also found that Cardiff and Vale University Health Board had failed to check whether W D Rees Maintenance was competent to carry out the work.
The health board was fined and ordered to pay costs of £15,845 after it admitted breaching s 3(1) of the Health and Safety at Work Act.
Wayne Daniel Rees pleaded guilty to breaching reg 4(1) of the Work at Height Regulations and was given a six-month prison sentence suspended for 12 months. He has been disqualified from being a company director for five years.
HSE inspector Gethyn Jones said after the hearing: "Dutyholders must ensure that all work at height activities are properly planned, appropriately supervised and undertaken in a safe manner.
"It is essential that companies employing contractors do not simply rely on the knowledge and experience of the contractor but make reasonably practicable checks themselves to ensure work is safely completed."
Topics
Work at height
Healthcare
News