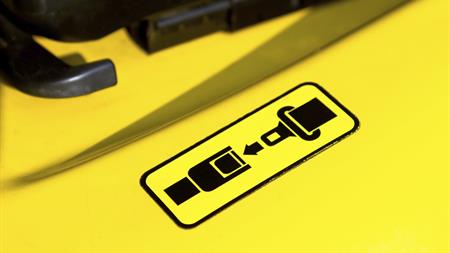 As we reported last month, 53-year-old George Hancock had just started his evening shift when he was crushed to death by his own forklift truck. The driver of another, larger double forklift was stacking pallets and operating with impaired vision when Hancock went round a blind corner and the two vehicles collided. The smaller forklift tipped over and Hancock, who was not wearing a lap restraint, was thrown from his seat and killed under his vehicle.

Bassetlaw District Council's investigation found that Wilko failed to enforce safe workplace transport rules. "In this particular area of the warehouse it was quite normal for forklift truck drivers to be moving when their vision was slightly obstructed, which they shouldn't do", said Liz Prime, head of neighbourhood services at Bassetlaw District Council. "There was an expectation that there weren't going to be any other vehicles in the area but, as we can see from the incident, that wasn't the case."

Drivers also were supposed to sound their horns when turning a blind corner but this practice was found to be inconsistently followed and nevertheless "wasn't sufficient to have managed the risks in the area", Prime highlighted.

The council concluded that one of the causes of the fatality was the failure to enforce the wearing of seatbelts. Since the incident, Wilko "has gone beyond the minimum requirements", Prime told IOSH Magazine, and fitted its forklifts with an interlock system. This prohibits the driver from starting his vehicle until he is strapped in. She added: "The company isn't what you'd call a rogue company; it doesn't have poor procedures generally and is a good employer -¦ It was the day-to-day supervision that didn't seem to be in place. We concluded that the driver wasn't wearing his seatbelt because of the culture of the organisation; it wasn't being enforced."

While a seatbelt might have avoided the fatality, it would not have prevented the incident. Wilko has since reassessed workplace transport risk, deployed more onsite supervision and installed a barrier to stop smaller vehicles entering some areas when large forklifts are operating.

The homeware company was fined £200,000 after pleading guilty at Nottingham Crown Court on 13 January to breaching Section 2(1) of the Health and Safety at Work Act for failing to ensure the health, safety and welfare of its employees. It will also pay the Council's full costs of £199,943. "We were awarded our full costs that covered the whole of our investigation, the coroner's inquest and the prosecution," said Prime.