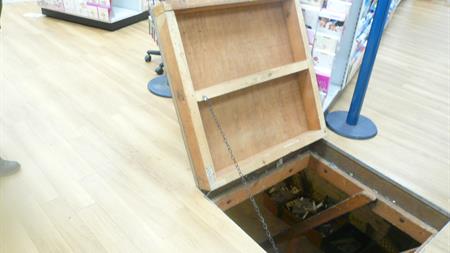 The injured person was shopping for a birthday card on 16 February 2014 when she fell. The trapdoor had been left open while staff fetched stock that was kept in the basement.

An investigation by Taunton Deane Borough Council, which brought the prosecution, found that the procedure had not been risk assessed and there was no signage or edge protection around the hatch.

The staff member on the shop floor who was receiving items up from a colleague in the basement was also supposed to keep customers away from the hatch.

She sustained bruising to her arms when she tried to catch the woman before she fell, but "was lucky that the outcome was not worse" the council said.

After the accident WHSmith moved items from the basement to a storeroom. It locked the trapdoor and completed a written risk assessment for staff who need to access the basement.

His Honour Judge Ticehurst said: "There was a lapse in focus of the corporate mind." He described the accident as the "foreseeable" result of the offending and said that "any other shopper" would have been "exposed to a risk of falling" through the trapdoor when it was open, given the "lack of protection".

He said that it was "abundantly clear" that the woman's injuries had had a "devastating effect" on her and on her way of life.