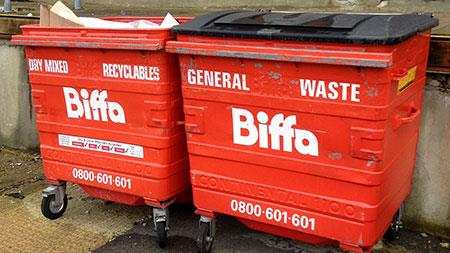 Figures from the Health and Safety Executive (HSE) revealed that three people died from sleeping in bins or skips during the 2017/18 financial year.

The Chartered Institution of Wastes Management (CIWM), Biffa and the Open University launched a survey this week, requesting contributions from the sector.

The questionnaire builds on work undertaken in 2014 when a study was conducted with the rough sleeping service StreetLink. According to industry news service Let's Recycle, a fifth of the 176 respondents reported finding people sheltering in their bins.

Dr Toni Gladding, secretary of the Waste Industry Safety & Health Forum and chair of the CIWM health and safety special interest group, is leading the research at the Open University.

She told Let's Recycle: "There is anecdotal evidence to suggest this is a problem that continues to challenge the waste industry, and we are seeking new responses from as many companies as possible so that we can investigate the scale of the issue."

Paul Wright, group health and safety director at Biffa, said that the new research would provide "fresh insights" into the issues and challenges of preventing people from sleeping in bins."

He added: "Your input, by completing this survey, will be fundamental to helping us find new ways to prevent people from sleeping in bins."

Respondents are asked to provide details of their policies in terms of people sleeping in bins or other waste containers and also to share incidents that have recently taken place.

The survey organisers note that it isn't always the homeless that take shelter in bins. A StreetLink survey found that 11% of those found sleeping in the containers were returning from a night out.

A report based on the survey responses will be published later this year.