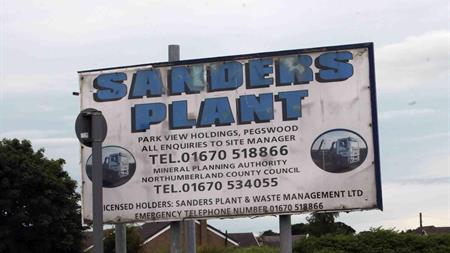 George Richardson had worked for Sanders Plant and Waste Management at its site in Pegswood, near Morpeth, for ten years when the accident happened in the main waste processing shed on 15 June 2015.

Newcastle upon Tyne Crown Court was told that the vehicle was being driven by Richardson's friend and work colleague, who was loading waste into both the trommel, a large separation and sifting machine, and a parked haulage vehicle. During the operation, Richardson was hit and died at the scene from his injuries.

An investigation by the Health and Safety Executive (HSE) found evidence of a lack of pedestrian and vehicle segregation in the waste shed.

Sanders Plant and Waste Management had carried out a risk assessment prior to the incident that identified some control measures to reduce the risks from operating the loading shovel and a forklift truck. However, they had not been fully implemented and were not sufficient to manage the risk of collision between vehicles and pedestrians.

The court was also told that there was a high volume of waste in the shed, which meant it was tight for the loader to move around. To make matters worse, a machine had broken down for a period of time and this had led to a build-up in waste.

According to the Newcastle Evening Chronicle, an HSE inspector had visited unannounced in September 2014 and concluded improvements were needed on the site. However, the inspector did not specifically refer to traffic management in the shed.

Prosecutor James Puzey said: "Conditions inside the waste processing shed were wholly incompatible with the safe movement of pedestrians and vehicles and furthermore the wheeled loader itself was badly maintained in ways that would have increased the likelihood of an accident.

Defending, Craig Hassall said: "The company accepts there were not separate entrances or exits for vehicles and pedestrians, there were no segregated walkways in the shed or in and out of the doors.

"[Sanders Plant and Waste Management] accepts such walkways were a reasonable practical measure-¦ and the company thereby failed to ensure the health and safety at work of employees while working in the shed."

Referring to the HSE visit in September 2014, Hassall added: "There was absolutely no specific advice given in relation to the inside of the shed or traffic management in the waste processing shed."

Since the incident, Sanders Plant and Waste Management has introduced improvements on the site.

These include a concrete wall being built to separate aspects of the work; staff being provided with radios; the implementation of a traffic management plan; and reverse alarms being installed on the wheeled loader.

Sanders Plant and Waste Management, of 40 Butterwell Drive, Pegswood, Morpeth, pleaded guilty to breaching reg 2(1) of the Health and Safety at Work Act. Judge Sarah Mallet took into account the fact that the company had no previous convictions when sentencing. She fined the company £500,000 and applied £14,042 in costs.