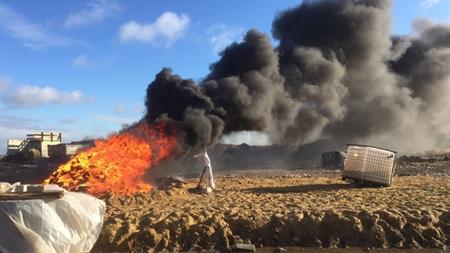 The fire at the West Midlands plant, which involved 50,000 tonnes of recycling materials, resulted in nine firefighters being treated for injuries or exhaustion.

It also draws on recent research covering the combustion properties of waste, which will be used to inform the industry on effective prevention measures, such as acceptable storage stack separation distances. The research includes extensive waste burn trials conducted in 2015 and 2016, carried out by the Health and Safety Laboratory, both in laboratory conditions and on a larger scale externally.

WISH anticipates that the final version of the revised guidance will be available in late March or early April.

Chris Jones, WISH chair, told IOSH Magazine: "Waste fires threaten the health, safety and wellbeing of workers on-site, firefighters and the wider public, so it's important that we continue to focus our efforts on preventing them and minimising the impact of those fires that do occur. The new guidance draws on extensive research and knowledge sharing between the industry, the Chief Fire Officers Association and other regulatory agencies."