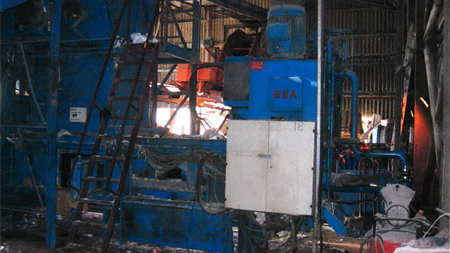 Gaskells (North West) and its director Jonathan Gaskell were sentenced both for their part in the death of Polish national Zbigniew Galka in 2010, and for continuing to operate the baler unsafely for up to five years after the fatality.

A joint Health and Safety Executive (HSE) and Merseyside Police investigation found that the 39-year-old worker was able to get into the machine at Gaskells (North West) site in Bootle on 23 December 2010 without switching off and isolating the machine.

Liverpool Crown Court was told on 26 October that Galka had entered the baler, which is used to compact paper and cardboard, to remove a blockage that had stopped it.

When Galka had cleared the blockage, the baler started and he was crushed in the compaction chamber by the hydraulic ram. He sustained hemorrhaging, shock and severe traumatic injury to both legs. He died before reaching hospital.

The investigation found that the compaction chamber's access door was fitted with an interlock to stop the baler when the door was opened. However, Michael Cunliffe, a maintenance engineer employed by the company, had fitted a bypass to its faulty switch board which had disarmed the interlock guard but allowed the baler to continue operating. The bypass had been installed because of defective and damaged wiring, which had most likely been caused by rats chewing through exposed wires. Cunliffe had informed management by email of the unsafe modification two months before the incident.

Phil Redman, HSE inspector, told IOSH Magazine that the modification was also noted on the company's daily defect report sheets, which only emerged when Merseyside Police raided the site and confiscated computers and other electronic devices and found email trails.

"The fact that the guarding wasn't working was reported daily, so everyone in the management team knew about it," he said. "There was common knowledge there was an issue with that guard."

The baler was also poorly maintained, often due to reactive rather than proactive maintenance, which meant that operators frequently had to intervene to clear blockages and other faults. Investigators found that another worker had previously sustained a broken leg when the machine was turned on after they had climbed inside.

Redman said that one of the most shocking revelations, which came to light after Merseyside Police seized equipment was that management had ordered a replacement interlock switch for the baler within an hour of Galka's death.

After a tip-off that the operator was continuing to use the same machine and that additional safety systems had been defeated, HSE inspectors visited the Bootle site on 16 July 2015. They found the baler could be operated while the guarding was open, putting the operator at risk of serious injury.

Gaskells (North West), of Foster Street, Liverpool, pleaded guilty to breaching s 2(1) of the Health and Safety at Work Act.

Judge Robert David Trevor-Jones determined the company's culpability as high. He said that the lack of training, supervision, risk assessments and standard operating procedures; together with a deliberate decision to bypass the safety features; putting profit before safety; the longstanding nature of the defects; and its failure to act on repeated complaints placed the firm at the top end of the category. (See box below for how the sentencing guidelines were applied).

Jonathan Gaskell of Peckforton Hall Lane, Tarporley, Cheshire, pleaded guilty to breaching s 37 of the HSW Act. Judge Trevor-Jones determined Gaskell fell into the high culpability category and set the starting point as one year's custody, reduced to an eight-month immediate custodial sentence. Gaskell must also pay £80,000 in costs (reduced from £105,454) and a hearing on his ability to pay has been suspended until 3 December.

Redman told IOSH Magazine: "It would appear on the face of it that they have now got suitable procedures and management systems in place. However, we need to put that to the test, so any future visits to the site will be assessing that they have been implemented correctly."

Michael Cunliffe, who'd pleaded guilty to breaching s 7 of the HSW at a sentencing hearing in November 2016, was handed a four-month prison sentence, suspended for two years.

On 25 January 2018, Paul Jukes, former transport and operations manager at Gaskells (North West), failed to have his conviction overturned at the Court of Appeal in London. Jukes had been jailed for nine months and ordered to pay £7,000 in costs at Liverpool Crown Court in November 2016 for failing to discharge the duty to take reasonable care of the health and safety of other employees, contrary to s 7 of the HSW Act.

The HSE had brought a case against Jukes because he had taken over responsibility for safety and maintenance of the baling machine after second in command, and former health and safety manager Des Brown was made redundant and left the company earlier in 2010. Jukes had been aware (as had Jonathan Gaskell) that the interlock had been bypassed and had failed in his duties.

Representing Jukes, James Ageros QC, argued his conviction was "unsafe" due to two pieces of prejudicial evidence being put before the jury.

However, Lord Justice Flaux, who sat with Justice Nicola Davies and Judge Neil Bidder QC, concluded: "Neither of the grounds of appeal even begins to establish that this conviction is unsafe, and this appeal is dismissed."