Viridor driver killed under his own runaway lorry 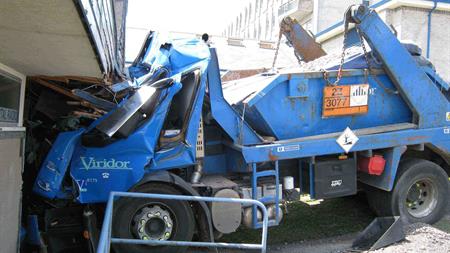 He had parked the lorry on a sloping public road outside the incinerator building and was coupling the lorry to the skip trailer when he lost control of the combination.

He was dragged under the wheels of the trailer and sustained fatal injuries as he tried to stop the vehicles. They continued rolling down the hill and collided with the hospital radio building.

The Health and Safety Executive (HSE) found the brake of the lorry had not been applied and that Viridor had failed to adequately risk assess the job.

According to local newspaper The Herald, the company had a generic risk assessment for loading and unloading skips and coupling trailers but it was not suited to the hospital site.

It reported that the 56-year-old had been told by another driver to park on the sloping road despite the fact it was hatched to prevent people stopping there. The HSE found that suitable flat areas were available.

Inspector Georgina Speake said: "It is my view that there were level areas within the hospital grounds that the defendant should have identified and designated for the drivers to load the skips and couple the trailer.

"The fact that the location chosen was on an incline heightened the need for careful risk assessment, and this was not done."

The lorry and trailer reportedly rolled across two zebra crossings, a road junction and into railings before it hit the hospital building and came to a halt.

In a statement Viridor said: "We recognise that, with the benefit of hindsight, the risk assessment associated with this case could have been more focused and we have taken action to address this.

"Health, safety and wellbeing is a priority and we will continue to take reasonable steps to safeguard our people as they go about their work."

The company pleaded guilty to breaching reg 3(1)(a) of the Management of Health and Safety at Work Regulations. It was fined and ordered to pay costs of £128,429 at Plymouth Crown Court on 20 April.

London, England
Up to £50000 per annum + plus excellent benefits
Reference
5447891
END_OF_DOCUMENT_TOKEN_TO_BE_REPLACED