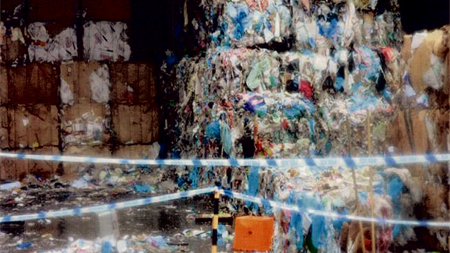 Six to eight workers were employed to hand sort waste on the picking line, where materials including plastic and cardboard are sorted according to type and then compacted and bound into rectangular bales. These bales are stored in the yard until being sold on.

Health and Safety Executive (HSE) inspector Alison Cook told IOSH Magazine there was not a safe system in place for stacking and de-stacking baled waste at Castle Donington. Bales would be stacked in three unsupported columns three bales high, with a bale sometimes placed across the top. This meant the rows of columns were not tied into the rows behind and could fall forwards. Also, de-stacking often left individual columns of bales that could fall either forwards and/or sideways.

"Bales should be stacked so that lower supporting bales are stabilised by overlapping and interlocking upper bales in alternative layers," Cook said. "Periodic monitoring of bale stacks should be done to ensure they remain stable. Putting one bale directly on top of another just created several columns next to each other."

Shortly after 9.30pm, as normal, the workers were sent to sweep up in the yard. Soon after, a stack collapsed and the worker was struck. He suffered fractures to his face and skull causing injuries to his brain.

The HSE's investigation found that Veolia failed to carry out a site specific risk assessment. Instead, it relied on a generic assessment that listed controls for presumed levels of risk. Use of generalised risk assessments had been highlighted as an issue to Veolia by the HSE before.

"Following the HSE guidance which deals with stacking and de-stacking would have pointed Veolia in the direction of interlinking and overlapping," Cook said.

At Leicester Crown Court the company admitted it had failed to ensure that baled waste materials were stored in a way to prevent risk from their collapse - an offence under Regulation 10(4) of the Work at Height Regulations 2005 - and fined £450,000, with costs of £11,676.