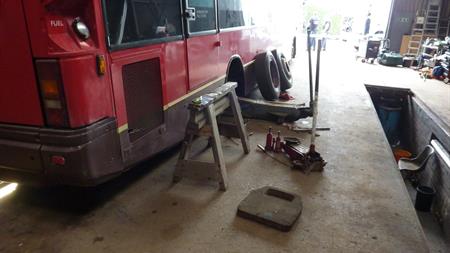 A D Hurst and Son Commercial was fined £50,000 over the incident at the company's site in Upwell, Cambridge.
Cambridge Crown Court was told that engineer David Nelson was working in a vehicle inspection pit beneath the single decker bus on 4 July 2017.
The rear end of the bus had been raised off the ground and was supported by two hydraulic bottle jacks to allow Nelson access to the brakes.
However, the vehicle fell from the jacks on to the worker, killing him instantly.
The Health and Safety Executive (HSE) said the two jacks were inadequate and that axle stands or other appropriate equipment should have been used instead to support the bus.
Inspectors found the company had not planned or organised the lifting of the bus to ensure employees' safety.
A D Hurst and Son Commercial pleaded guilty to breaching s 2(1) of the Health and Safety at Work Act and was ordered to pay costs of £22,282.
Its director, Alan Hurst, admitted breaching the same act and was sentenced to six months in prison, suspended for 18 months.
HSE inspector Paul Unwin said: "[Nelson's] death could easily have been prevented if his employer had acted to identify and manage the risks involved, and to put a safe system of work in place.
"Employers should make sure that they properly assess and apply effective control measures to minimise the risk from dangerous work activities."
Topics
Safe systems of work
Manufacturing and engineering
News