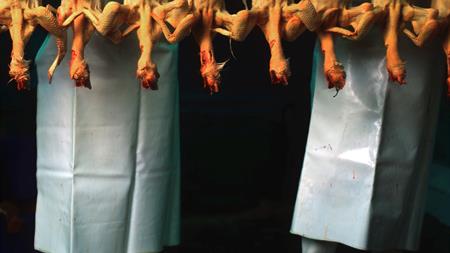 The data, which has been analysed by The Guardian newspaper and the Bureau of Investigative Journalism, an independent, not-for-profit organisation based in London, shows that on average there are 17 "severe" incidents a month in US meat plants. The injuries include amputations, burns and head trauma.

According to the OSHA figures, amputations happen on average twice a week. In a 31-month period from 2015 to 2017, the data showed there were 270 incidents. Most involved the amputation of fingers or fingertips, although there were also cases where workers had lost hands, arms or toes. Over the same period, there was a total of 550 serious injuries.

However, the data was drawn from only 22 of the nation's 50 states, which means the total number of serious incidents in the US is likely to be substantially higher.

The sector's injury rates have reduced significantly over the past 25 years. The latest data from the US Bureau of Labor Statistics shows that the incidence rate for injuries in the meat and poultry packing and processing industries had reached an all-time low of 5.3 cases per 100 full-time workers per year. This compared with over 20 cases in 1994.

Even so, the joint Guardian and Bureau of Investigative Journalism analysis notes that US meat workers are already three times more likely to sustain serious injury than the average American worker.

Campaigning groups have also warned that government plans to remove speed restrictions on pig processing lines, which are currently being debated, could put workers at greater risk of injuries and chronic ailments.

Amanda Hitt, from the Food Integrity Campaign, said: "Increased line speeds pose a real threat to workers. In addition to heinous injuries resulting from speed such as amputations and physical injury, workers are also at risk from injuries resulting from repeated motions. A pork plant worker may make -¦ hard-cutting knife motions while working on a line. This repetition puts the worker at risk [of] debilitating musculoskeletal problems".

However, the North American Meat Institute, a national trade association that represents companies that process 95% of red meat and 70% of turkey products, has countered and said that the proposed removal of line speed caps is not about speeding up the process, but is designed to allow the line inspector to decide an appropriate speed for safety.

A spokesperson said: "The requirement to comply with food safety rules imposes a line speed limit."