*UPDATED* Container terminal in the dock over freight carrier injuries 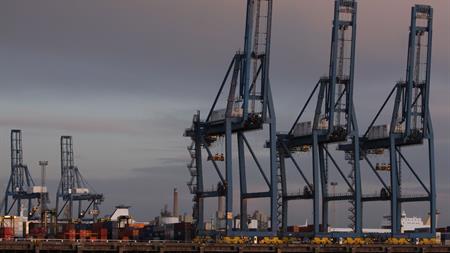 LCT had failed to provide barriers to prevent vehicles falling into an excavation and did not warn the drivers of the digging works. As a result, all of the drivers working in the vicinity of the excavation were exposed to the risk for several days.

On 16 November 2014, one of the workers inadvertently drove his straddle carrier -- a vehicle used in the port terminal for stacking and moving freight and shipping containers -- into the excavation, which was approximately 0.6 m deep.

The carrier toppled over and the driver sustained serious injuries. These included a head injury that required 29 clips in a laceration; a chest injury, including bruising of the left lung and two fractured ribs; a T2 (second thoracic vertebra) fracture of the spine; and a shoulder injury. He still suffers from post-traumatic stress disorder.

The HSE investigation found that repair work on the dock area involved repairing the surface sections of AA Block and the roadway between AA and DW Blocks. Two companies: 1 to 1 Services and Macadamac Surfacing, both based at the Tilbury complex, were employed to carry out the repair work. 1 to 1 undertook the initial excavations and Macadamac carried out the tarmacking, but due to poor weather this had not been completed.

There were four excavation areas: two in AA Block and two in the roadway between AA and DW Blocks. In the area where the incident took place (AA Block behind the Quay Crane) the excavation was marked by four cones, blue rope and small roadwork lights. However, the lighting in and around the area was poor and after a day of heavy rain, the excavation was full of water, concealing its depth.

In addition, on the morning of 16 November, the daily/shift briefings failed to warn the drivers of the civil works taking place. Later that evening, around 7pm, the driver was operating a straddle carrier from a cab 15 m above ground.

He had just deposited a container at the back reach of the Quay Crane when he turned and drove into the unguarded excavation. Due to the poor light and weather conditions, he had failed to see the road cones, small flashing lights or the ticker tape marking out the excavation. Also, from the height of the cab, it would have been impossible to distinguish a puddle on the dock to an excavation full of water.

LCT, which is part of Forth Ports Group, initially denied breaching s 2(1) and 3(1) of the Health and Safety at Work Act. However, three days into a three-week trial that began on 6 February 2017 at Basildon Crown Court, the company changed its plea to guilty.

Judge Pugh determined LCT's culpability as medium. The seriousness of the harm risked was level A and the likelihood of the harm arising was medium (harm category 2).

The Port of Tilbury London was classified as a large organisation; its turnover was £100m and a starting fine of £240,000 was imposed. However, as LCT's turnover was at the lower end of the medium company scale, the judge then reduced the fine to £200,000. While no members of the public were put at risk, and the workers at risk were limited, he found the breach was a significant factor in the cause of the incident and so increased the fine to £250,000.

Judge Pugh then took into account that, aside from the worker's injuries, there were no aggravating features. LCT had no previous convictions, it had co-operated with the HSE investigation, had a good health and safety record and had voluntary introduced new procedures following the incident. The fine was then adjusted to £210,000.

Finally, he determined whether the fine was proportionate. As LCT was making a substantial loss at the time of the incident but had assets over £21m, combined with the Port of Tilbury London's turnover, he determined that no further reduction was required. However, he did account for the guilty plea, adding that the company had saved court time.

HSE inspector Nicola Jaynes told IOSH Magazine that immediately after the incident, LCT installed barrier boxes around all the civil works on the terminal.

"They also improved their briefing system of information provided to staff to ensure all civil works were included in daily/shift briefings and have looked at [improving] the lighting on the terminal."