*UPDATE* Worker was trapped between shovel loader and her lorry 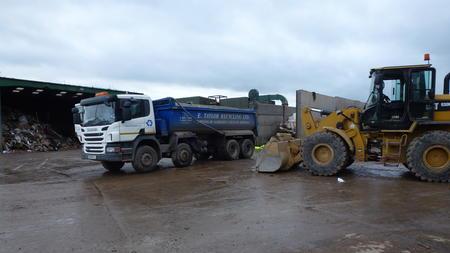 Beverley Upton, an employee of waste management firm Mac Skip Hire, had been sitting in the cab of her truck while her co-worker used a shovel loader to fill the vehicle with garden waste for off-site disposal.

A piece of carpet became lodged against the top edge of the lorry and Upton climbed out to try and remove it manually. The driver of the loader then attempted to drag the carpet free using the vehicle's bucket. He did not see that Upton was still in the vicinity and she became trapped between the bucket and the side of her truck. She died almost instantly as a result of her injuries.

HSE inspector Mark Austin carried out a site-wide inspection the day after the accident, which happened on 4 November 2015. He found the company's failure to enforce "basic site controls and rules" resulted in pedestrians and vehicles not being suitably segregated and served an improvement notice.

He said: "There was a failure to organise the workplace in terms of segregating vehicles and pedestrians. The company had got some systems and policies written down but they hadn't appeared to be followed through and enforced on site. I felt there was more that could have been done.

"Pedestrian walkways had faded and the wearing of hi vis vests had not been enforced; people weren't wearing them, including Ms Upton at the time [of the accident]."

Austin also found the hopper, conveyor, trommel and sorting line were in poor condition and served a further two improvement notices and one immediate prohibition notice that read: "Persons liable to suffer injury or death from either contact with unprotected electrical conductors or from contact with the ascending conveyor because suitable guarding or other protective measures have not been taken."

"[The company] enforced the wearing of hi vests and other PPE," said Austin, "and designated parking bays were introduced for certain vehicles."

At Leicester Magistrates' Court on 30 January, Judge Timothy Daber concluded that culpability was medium. The seriousness of harm risked was level A and the likelihood of harm was medium (harm category 2). He then moved up a harm category to 1 to reflect the fact the offence exposed a number of workers to the risk of harm and was a significant cause of actual harm.

The starting point for the fine was £100,000 because the company fell in the "micro organisation" turnover range. The judge reduced this by 10% for mitigating factors, including its co-operation with the investigation, before he applied a reduction of one-third as it pleaded guilty at an early stage.