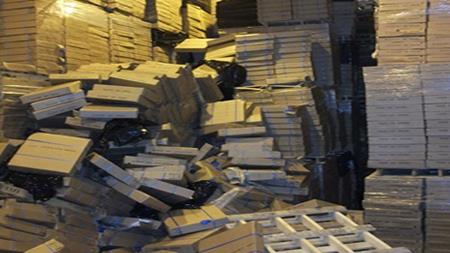 On the day of the accident a ship delivered frozen fish to Interfish's Plymouth factory. The shrink-wrapped pallets (each weighing approximately one tonne) were moved by forklift into one of the company's cold stores.

A stack of pallets collapsed after one of the forklift truck drivers noticed it was unsteady and tried to stabilise it by pushing it backwards. No one was injured in this initial fall and three employees were sent into the cold store area to tidy up the fallen boxes.

While they were doing this, another stack collapsed. The falling boxes hit Tomas Suchy, 22, who died at the scene from multiple injuries. Another worker was struck on the shoulder and is still off work with nerve damage.

When the Health and Safety Executive (HSE) arrived on site to investigate what happened, it found a number of matters of concern in the cold store areas.

"The stacks were excessively high -- the only limit was the ceiling," said HSE inspector Emma O'Hara. "They were quite unstable where the pallets weren't always placed directly on top of each other, and the shrink wrapping was inconsistent so boxes had moved around."

The HSE served Interfish with four prohibition notices, forbidding use of the company's freezers, and an improvement notice with a three-month compliance period.

The investigation found that there was no safe system of work for stacking pallets and that instructions to staff were vague and relied on their common sense. Interfish also lacked a written procedure for dealing with stock falls.

"They didn't have a risk assessment at all or a safe system of work," said O'Hara. "Rather than sending in staff immediately after a fall, they should be looking from a distance to see whether any more falls were likely and if there was a better way to pick [the boxes] up."

The HSE inspector added that, at the sentencing hearing at Plymouth Crown Court in June, Judge Ian Lawrie said: "'There was no evaluation or attempt to evaluate the risk of sending employees, who did not ordinarily work within the freezer, to start picking up the fallen boxes. They were not given basic protective clothing such as helmets.'"

Interfish pleaded guilty to breaching Section 2(1) of the Health and Safety at Work Act. The judge assessed the culpability of the offence as high, and level A for the seriousness of harm risked with a medium likelihood. Interfish was a medium-sized organisation and this meant the category range for the fine was between £200,000 and £1.2m. Judge Lawrie's entry point was this upper limit.

"The judge felt that it was 'evident that within the safety system there crept in an element of at worst complacency or at best a persistent oversight'," O'Hara told IOSH Magazine.

"He said that photographs taken after the incident 'showed some pallet arrangements that appeared haphazard and far from a neat vertical stack. They also show the upper parts of the stacks leaning against other stacks. The company conceded that what is shown in the photographs is unacceptable. The concession indicates that despite striving to maintain a safe system of work within the freezer unit, the aspiration was not being matched by the reality of operations within the freezer unit'."

Judge Lawrie reduced the fine to £750,000 based on the company's mitigation and the early guilty plea discount brought it down to £500,000. Interfish was also ordered to pay £24,800 in prosecution costs.

"They had no aggravating features, hadn't been convicted of anything before, had taken steps to make improvements and had a generally good health and safety record," said O'Hara. "They also cooperated with the investigation and showed remorse."

After the accident on 18 October 2013, Interfish made several improvements to its operations at the Plymouth site and complied with the HSE's improvement notice. It revised its risk assessment and drew up a new safe system of work, significantly reduced the height of the stacks in the four freezers, implemented pyramid stacking, and increased monitoring and supervision in the area. It also improved forklift truck driver training and introduced degrees of competence.

In order to deal with fallen stock, Interfish put into place a 'stop procedure'. "Now if there is a fall, all work in the area stops and senior managers are brought in to assess the best way to deal with it," explained O'Hara. "There was a lot of work around what to do if there was a stock fall."

She added: "They did make lots of effort to come up with a solution that worked for them. The new safe working procedure has photographs and clear instructions for the staff about what a safe stack looks like, for example."