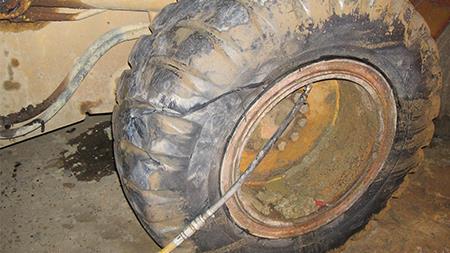 Matthew Hoare, a mobile tyre fitter for Watling Tyre Services (read previous story from earlier this month), was sent out alone to repair the puncture on a wheel of a loading shovel at brick maker Hammill Brick in Kent. He was carrying out a plug repair, when the 1.4 m-diameter tyre failed and exploded.

The force of the blast threw Hoare against a wall and shredded his high-visibility jacket into small pieces. He died from severe head injuries. A Hammill Brick employee, who was standing near Hoare while he carried out the repair, was knocked off his feet but escaped injury.­

The Health and Safety Executive's (HSE) investigation revealed that Hoare was not trained or competent to carry out the task.

"The company only provided its workers with in-house on-the-job training. There was no theory training or assessments following on-the-job practical training," said HSE inspector Mike Walters. "There were no training records for Matthew -- his training record was blank -- so no one can confirm exactly what he knew, but Watling did make it clear in court that he hadn't been trained to deal with sizeable off-road tyres."

The executive also found that the young worker was using poorly maintained equipment; gauges were missing on both the air receiver and tyre pump compressor and the air line.

"Watling was over-reliant on the staff reporting issues with equipment. They should have checked on a regular basis that the equipment on board was maintained and right for the tasks," said Walters.

At Canterbury Crown Court, Watling Tyre Services pleaded guilty to breaching Sections 2(1) and 3(1) of the Health and Safety at Work Act. Judge Adele Williams fined the company £1m, though it had objected to her applying the sentencing guidelines, which came into force in February this year, because the accident happened on 27 January 2006 -- more than ten years ago. Watling had its one-third discount for an early guilty plea reduced to 25% because it did not plead guilty at the first opportunity in court. The company must pay the fine plus £99,485 in costs by the end of August.

"The judge originally said everything had to be paid in full by 31 July this year," said Walters. "[Watling] asked for two years but she made it very clear that wasn't going to happen; they'd had ten years to put money aside. In the end she gave them an extra four weeks."