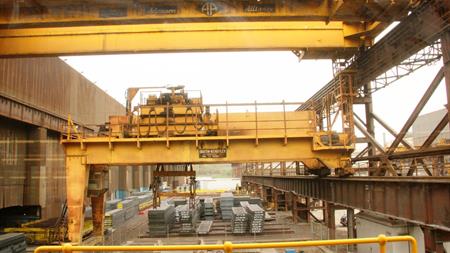 Tata Steel employee Thomas Standerline, 26, was carrying out maintenance work on a semi-goliath gantry crane in the slab yard at the company's large steel plant in Scunthorpe, Lincolnshire, when the accident happened in April 2010.

He was standing in the semi-goliath's inspection cage when another overhead crane passed directly above him. He was caught between the two and died instantly.

Health and Safety Executive (HSE) inspector Kirsty Storer said that at the time contractor Harsco Metals was responsible for running the slab yard and operating the cranes.

She told IOSH Magazine that, due to a breakdown in communication, the employee who was operating the overhead crane was not informed that Standerline would be working on the semi-goliath underneath.

She said: "They should have been told, 'We're doing this work, this is what it consists of and you need to isolate both cranes'. That message never got through so they didn't know [Standerline] was going to go into the cage."

The two cranes were used to transport hot metal to a cooling area. The semi-goliath moved on rails at ground level while the overhead crane travelled above it on overhead bars. There was a 100 mm clearance between them when they passed one another.

On the day of the accident Standerline was inspecting the semi-goliath's collector shoes, which ran along a live busbar to power it. The power for both the cranes was supplied this way and, though the electricity feed to the semi-goliath had been isolated, it had not been shut off for the overhead crane.

Standerline walked through a broken gate that should have been locked and climbed up a stepladder into the collector inspection cage, which was not fully enclosed and had only a waist-high railing. At the same time the Harsco employee began to move the overhead crane, which had not been fitted with flashing warning lights or stop-blocks. Its collector cage travelled over that of the semi-goliath, where Standerline was standing, and crushed him.

"He was squeezed between a 10 cm gap," said Storer. "Had the [overhead] crane been isolated, this would not have happened."

She said there had been two previous incidents in September 2008 and February 2010 that shared features with the one that cost Standerline his life: "The lessons from these accidents weren't properly learned; they should have acted as a warning that this could have happened."

"These two incidents serve to illustrate that there was a potential problem in the slab yard in terms of safety by reference to (a) the need for isolation of power supply to the cranes when maintenance work was being undertaken (so that the cranes could not move and thereby preventing crushing between the two); and (b) ensuring everyone was familiar with safety procedures."

Tata took steps to remedy shortcomings at the slab yard after Standerline was killed. A roof was added to the semi-goliath collector cage, and both cages were redesigned so there was clearance when they passed each other. Tata provided refresher training for its maintenance staff, and communication between both companies' employees was improved.

Tata pleaded guilty to breaching ss 2 and 3 of the Health and Safety at Work Act and the judge imposed the total fine against the s 2 charge. (See table below for how the judge applied the sentencing guidelines.)

During sentencing at Hull Crown Court on 2 February, Judge Richardson said: "[The company] has a far from exemplary health and safety record. I appreciate that the company is very large and conducts many operations which are hazardous, but the volume of convictions of the defendant company reveal to me a situation of concern in relation to health and safety."

Tata Steel was fined £1.9m in July 2016 after two workers were seriously injured in separate incidents at its Northamptonshire plant. This was later reduced to £1.5m. And last August it landed a £930,000 penalty after five plant workers were exposed to toxic and flammable vapour.