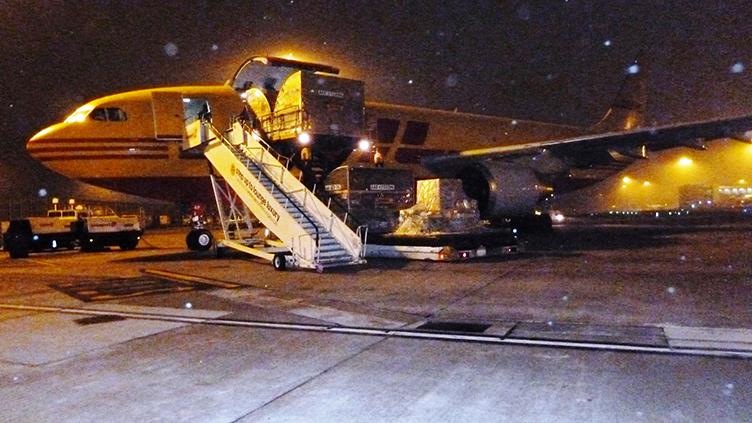 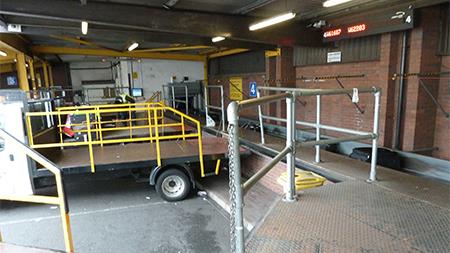 Passenger suitcases were being unloaded from a commercial aircraft and lifted on to a flatbed truck before being driven to the terminal building at London Luton Airport in June 2015.

The baggage handlers, who were Swissport employees and agency workers, stacked the suitcases above the height restriction marked on the truck cab's rear window, obstructing the driver's view.

When the team leader instructed the driver to take the bags to the terminal building, he checked his mirrors and drove away. He did not see his boss standing on the flatbed truck, which had no edge protection at the rear. The team leader fell off and sustained spinal injuries that left him unable to work for eight weeks.

The HSE investigation found the workers may not have followed Swissport's procedures because they were under pressure to unload the plane as quickly as possible. They should have fetched another flatbed truck rather than overloading the one they had, but "they didn't do that because they felt it would have delayed them", said inspector Emma Page.

The company had also failed to implement a procedure to prevent drivers from moving off with people on the back of their vehicles.

The HSE had made Swissport aware of similar risks at Gatwick Airport in 2007 and 2010, when it served two improvement notices on the company following two accidents involving falls from flatbed trucks.

All baggage handlers have now been prohibited from obscuring the rear windows of the trucks, while drivers must sound their horn to warn others they are about to set off. The workers are informed in advance roughly how many suitcases will be on the inbound flight so they can send two flatbed trucks if necessary.

In September 2015 a night worker was injured while he was being trained how to unload containers (known as unit load devices or ULDs) from a cargo aircraft using a high loader -- a device with two platforms which raise and descend to load and unload the ULDs.

He climbed the ladder on the cargo high loader to access the hold from the front platform, but his safety shoes were worn and he slipped on the wet metal rungs. He fell about 2 m and sustained an impact injury to his right foot.

Page said Swissport had failed to properly plan work at height. The injured party should have climbed the aircraft steps at the front of the aircraft and walked through the plane to the hold, she said.

"These access ladders are designed purely for the cargo high loader operator to climb into his seat. They are not designed for anybody else and there is a sign on most high loader models that says, 'Ladder to be used in raised position in emergency only'. He was incredibly lucky."

The investigation found workers were routinely climbing the ladder when it was raised in the air rather than going up the aircraft steps. The ladder on the high loader could be extended to a height of 9 m.

The ladder had been raised from its lowest position of 1.8 m to just over 2 m when the accident happened.

Like the first accident, workers had reported being under pressure to unload the cargo as quickly as possible.

"All the time the plane is sitting on the ground, it's not earning money," said Page, who added: "It was much easier and quicker for them to just climb the ladder rather than wait for the aircraft steps and then walk through to the cargo hold."

She added that Swissport did not provide any training to workers on how to safely access the cargo high loader platform, nor did it have adequate procedures in place for monitoring its workers.

"New workers received training from Swissport covering safe working procedures at the airport, but it did not ensure that these working practices were adopted by cargo handlers on a day-to-day basis."

Swissport pleaded guilty to breaching ss 2(1) and 3(1) of the Health and Safety at Work Act for the incident involving the flatbed truck, and reg 4(1) of the Work at Height Regulations for the cargo high loader fall. It was fined £502,000 at Luton Crown Court. (See table below to see how Judge Nicholas Madge applied the sentencing guidelines.)