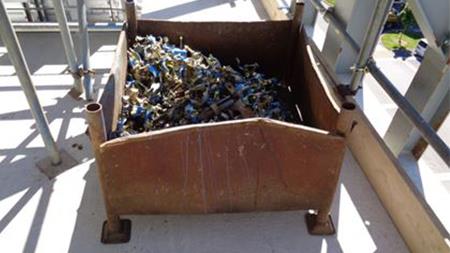 Zero C Holdings was the principal contractor for the building project, which involved the construction of two steel-framed buildings at Queen Mother Square in Poundbury, Dorchester. Carter Training, part of the Carter plant hire group, had been contracted to carry out the lifting work.

On 9 June 2015 six stonemasons who were contracted to Zero C, including Sarah Klopper, 44, were pointing brickwork on one of the buildings on a scaffold 10.5 m above the ground.

At the same time, Carter employees were using a mobile crane to lift a stillage container of 500 scaffold fittings up to the eighth floor, 20 m above ground. The stillage, which was suspended 10 m directly above the stonemasons, was attached to the crane with two chain slings.

One sling slipped up towards the other and caused the stillage to tip forward more than 90 degrees. The fittings, each weighing 2 kg, poured out and fell into the scaffold below.

Klopper shielded her face before eight to ten fittings fell on her. She sustained two fractures to her left shoulder blade, a fracture to her left collar bone, a cut to the back of her head and severe bruising.

"Her hard hat saved her life," said Health and Safety Executive (HSE) inspector Nicole Buchanan, who visited the site several days later. "She was very lucky and remarkably, no one else was hurt."

Buchanan found that Zero C had approved the risk assessment for moving the fittings to the eighth floor, which had to be done by hand. That was not realistic, she said, as they weighed one tonne in total.

"Because of poor planning, there was no way the scaffold fittings realistically could have got to the top," she said. "So workers improvised and lifted something that was inherently unsafe. It's foreseeable that you'd need scaffolding at such height and scaffold fittings are heavy."

The inspector also found the stillage was structurally unsafe and should not have been lifted over workers' heads. She told IOSH Magazine that it had been "poorly slung", did not have lifting eyes, was corroded, had no safe working load, and did not have a lid.

After the accident Carter drew up a new, more detailed lifting plan that incorporated the facility to lift scaffold fittings. The company bought a new lifting bin and introduced a system that entailed workers leaving the lifting area when a whistle was blown.

They pleaded guilty to breaching reg 13(1) of the Construction (Design and Management) Regulations 2015 and reg 8(1) of the Lifting Operations and Lifting Equipment Regulations respectively.