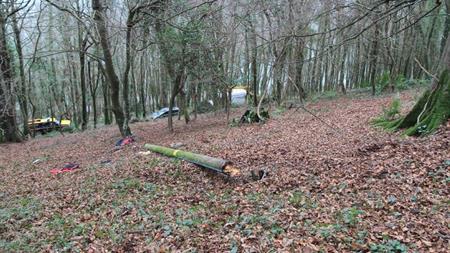 WPD had instructed a group of 15 employees to carry out emergency repairs at a remote site in Cawsand after a subcontracted pole tester had identified low-hanging overhead cables on 16 January 2013.

The work involved replacing four uninsulated wire conductors with an aerial bundled conductor (ABC) on eight poles, each sited about 40 m apart in a wood leading down to the Ministry of Defence Royal Navy's adventure training site, Pier Cellars.

That evening, the linesmen met at a nearby restaurant before travelling to the site. Health and Safety Executive (HSE) inspector Georgina Speake said the pre-planning was inadequate, as was the discussion of work methods before work started. There was no supervisor arranged.

The group arrived on site around 8pm and disconnected the high voltage line so the replacement work could begin.

Ryan Thomas, 28, was at the top of the third pole when his colleague, who was working up ahead on the second pole, cut the overhead line between the two. This created a release in tension causing Thomas's pole to crash to the ground.

He was attached to the pole with his climbing harness and plunged between 5 m and 6 m. The pole landed on top of him causing fatal internal injuries.

Speake explained: "On cutting that fourth wire, it created a shock load on pole three which caused it to fail at ground level."

The inspector visited the site the day after the accident. She told IOSH Magazine that she found a catalogue of failings during her investigation.

"The generic risk assessment was not suitable or sufficient to address the risks associated with unbalanced forces and shock loading," she said. "There was no suitable detailed procedure for removing and replacing the wires, and training procedures were not followed."

On the last failing, Speake said records showed that WPD had trained staff how to cut wires so that tension would be released slowly to prevent shock loading. However, the remote location encouraged the linesmen to take "shortcuts, cutting and dropping the wires without any consequence of what was happening below".

She added: "The procedures that were in place were not being followed."

Replacing open wire conductors with an ABC at night is now a documented procedure in one of the company's standard techniques.

WPD pleaded guilty to breaching s 2(1) of the Health and Safety at Work Act. It was fined at Truro Crown Court on 29 June and ordered to pay £113,115 costs.