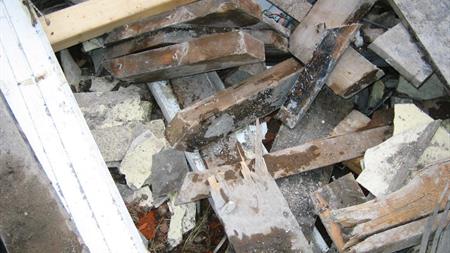 Montway was responsible for the demolition of a two-storey detached house in Golders Green, London. Labourers Ioan Vancia from Romania and Albert Sejdijaj from Kosovo had been instructed in English to tear down the roof and clear away the demolition debris. Vancia had a limited command of the language, while Sejdijaj spoke reasonable English, but did not speak Romanian.

Vancia had climbed on to the roof on 25 February 2013 to clear away wood when he fell 5 m. He sustained broken ribs, one of which punctured an artery, a fractured spine, damaged spleen and kidneys, head injuries and has continuing eye problems. He was in a medically induced coma for two weeks and remained in hospital for three months.

The accident was reported under the Reporting of Injuries, Diseases and Dangerous Occurrences Regulations and Health and Safety Executive (HSE) inspector Andrew Verrall-Withers visited the site on 14 March 2013.

Verrall-Withers closed the site after he found sheets of white asbestos left in a pile, close to a neighbouring garden. He discovered Montway did not know where the rest of the asbestos was and served it with a prohibition notice, stopping all work on site until an inspection had been carried out to locate it. The company complied with the notice and the broken pieces of asbestos subsequently found mixed with rubble were removed by a specialist company.

Montway was served with a second prohibition notice, halting work until it prevented debris from falling into an alleyway beside the site, and an improvement notice requiring it to erect fencing at the back of the site within 21 days.

The HSE also found that no scaffolding had been put up and the work was not supervised. One of the company's directors, Dermot McSweeney, acted as the site manager between 21 and 23 February before going on a training course on 25 February, when the company's recorded site manager, David Talty, took over.

Montway initially pleaded not guilty. It later pleaded guilty to breaching s 2(1) of the Health and Safety at Work Act, but sought a Newton hearing to decide several disputed issues, including its claim that that Vancea was told not to go on the roof.

During the Newton hearing, which took place at Westminster Magistrates' Court on 23 and 24 May, District Judge Roscoe said there had been "multiple failures" by the company and "that the roof was demolished without suitable measures being provided". She "did not find Mr McSweeney to be a particularly convincing witness" and believed Talty had a "very lax approach to the paperwork".

"Although I cannot be sure why Mr Vancea went onto the roof [-¦] I have no doubts that he did so believing he was assisting in the demolition of the roof. I am satisfied that he was not 'on a jaunt of his own'," Judge Roscoe said.

Summing up she added: "There was no supervisor on site at the time of the accident. Perhaps more importantly, Mr McSweeney was not a qualified site manager when he set up the site on the Thursday. There were inconsistencies in the paperwork as to who was the site manager.

"The principles of this legislation are that there is a positive duty on an employer to provide health and safety. It is not sufficient simply to say that an employee was not told to do something that could be dangerous. It is the duty of the employer to tell the employee clearly that he must not do such a thing."