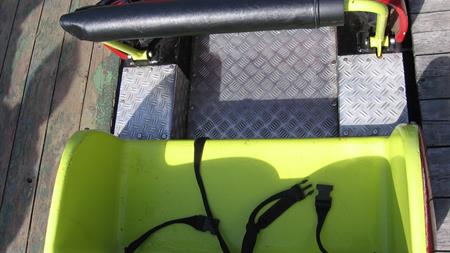 Lucy Hibbert, from New Zealand, boarded the Ladybird rollercoaster at 2.15pm on 5 June 2012 with her cousin and six other family members. The ride was designed to complete two circuits of a figure-of-eight-shaped track.

During the first circuit Lucy's right leg came out of the side of the car and became trapped between it and the platform edge when the train pulled into the station. Her leg was drawn along the 15 m platform as the rollercoaster passed through the station and embarked on the second circuit.

She sustained ligament, cartilage and nerve damage to her leg and foot.

Health and Safety Executive (HSE) inspector Kate Dixon served an improvement notice on LVA on 12 June 2012. She told IOSH Magazine that the need for a prohibition notice was obviated by the company's promise to close the ride until it had reduced the risk of entrapment.

By 3 July that year, LVA had fitted a fibreglass panel to the right side of each of the cars. Children accompanied by adults now are required to sit on the right and the height requirement for unaccompanied children was increased from 1.1 m to 1.2 m.

LVA built ramps at the ends of the station platforms to remove the point where limbs could be drawn in. "The ramps eliminated the sudden start of the platform, which was a very obvious entrapment risk," Dixon said. "If your foot was outside of the carriage, the ramp would lift it up and over the platform, rather than it becoming caught."

The company updated signage and put up additional notices warning passengers to keep their hands, arms and legs inside the vehicle at all times. It also introduced two-way radio communication for the ride's operator to use in times of emergency.

During its investigation the HSE found that LVA had contracted David Geary (who was trading at DMG Technical Services) to carry out design maturity risk assessments on all of the theme park's rides, which he did between 2000 and 2002. Under the Amusement Device Inspection and Procedures Scheme (ADIPS), a design maturity risk assessment is required on devices manufactured before October 1997.

Geary risk assessed the rides again in 2006, however he had failed to consider the possibility of lower limb entrapment on the Ladybird, the HSE found.

Dixon said: "[The risk assessment] mentioned shearing and entanglement but absolutely nothing about entrapment. It also mentioned fingers, hands, hair and clothing, but nothing about legs or feet either."

It HSE also found the ride operator had failed to check that Lucy's lap bar was in place and that she was wearing her seatbelt.

Both parties were sentenced at York Crown Court on 26 May, when Judge Andrew Stubbs said there was a "lack of dialogue as if the piece of paper alone was sufficient. There was also a failing in the way the ride was operated."

The judge determined that LVA's culpability was medium and placed the offence in harm category 3: "The likelihood of harm was low but a large number of people were exposed to the risk and the breach was a significant cause of harm," he said. The company had an annual turnover of £6m and was classed a small organisation under the sentencing guidelines.

Geary was found guilty of breaching s 3(2) of the HSW Act and was fined £7,500 plus £2,500 costs. Judge Stubbs said it was "not in the interests of justice to apply the guideline as if I were sentencing an individual" because [Geary] was "plainly operating as an organisation".