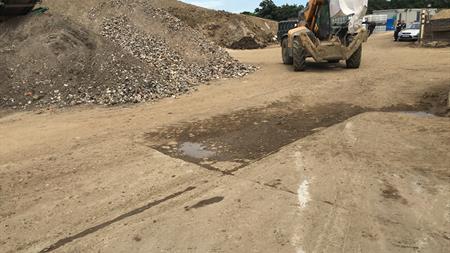 Brighton Magistrates' Court was told on 12 October that United Grab Hire had no adequate segregation measures, such as walkways or crossing points, in areas where pedestrians were likely to be present at its site in Horley, East Sussex.

Health and Safety Executive (HSE) inspector Russell Beckett told IOSH Magazine that there was "a culture of pedestrians mixing with large vehicles" at the recycling site, where waste from large utilities was processed.

"There was CCTV [footage] of the incident [on 7 July 2016] and we also looked at the 24 hours preceding it. We noted that there were numerous near-misses in terms of pedestrian and vehicle manoeuvres. [Workers] were walking right through the middle of the yard while heavy goods vehicles, shovel loaders and telehandlers were reversing."

The HSE investigation also found that United Grab Hire had not trained the driver of the telehandler to operate the vehicle.

United Grab Hire pleaded guilty to breaching ss 4(1) and 17(1) of the Workplace (Health and Safety Welfare) Regulations. The firm must also pay £5,968 costs.

Director Mark Howard pleaded guilty to breaching s 37 of the Health and Safety at Work Act. He was jailed for six months, suspended for two years.

Beckett said there were no aggravating factors. United Grab Hire had co-operated fully with the investigation, had no previous convictions and had put in place improvement measures after the accident. These included segregated walkways, a limit on the number of vehicles entering the site, and a one-way system for vehicles to manoeuvre safely.