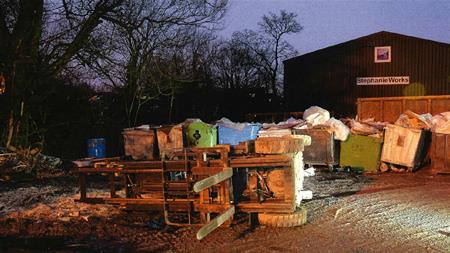 Ben Pallier-Singleton had worked at the PVC manufacturer's site in Chinley, Derbyshire, as a process operative for about 12 months when the accident happened on 10 February 2015.

He was working the nightshift at the plant's plastic extrusion department, where rolls of film are made. At 4.20 he drove a FLT down a sloping concrete roadway in the external yard to collect some pallets, but did not return, Manchester Crown Court was told.

The FLT slid on the concrete before its right-rear wheel fell 45 mm off the edge of the ramp and on to an area of compacted hard ground that butted up against it. The truck overturned despite being fitted with a system of active stability (SAS). Pallier-Singleton was not wearing his seatbelt and the truck's safety frame landed on his neck, fatally injuring him.

"In theory, the [SAS] means the truck should have remained upright even though it dropped off the edge," said HSE inspector Berian Price. "The company tried to say the deceased didn't drive the truck in the correct manner but there's no evidence to suggest that."

The HSE and Derbyshire Constabulary found that when the accident happened the road was extremely slippery because it was covered in mud and waste plastic granules that had spilt in the yard.

A series of safety failings were uncovered during the joint investigation.

Illuminance levels for lighting in the yard were below the minimum 20 lux recommended in HSE guidance, Lighting at Work (www.hse.gov.uk/pubns/priced/hsg38.pdf). In addition the light output of the FLT's headlamps was estimated to have been around just half as Vinyl Compounds' failure to regularly inspect the truck meant dirt had accumulated on them. This would have impaired the driver's forward vision in the dark, Price observed.

The company had not taken steps to eliminate the 45 mm drop at the edge of the roadway, including installing a barrier to help prevent truck drivers falling down it. It had failed to show workers the risk assessment that said the on-site speed limit was 10 mph, and had not fitted its FLTs with speedometers or any other form of speed control.

Finally, Vinyl Compounds had failed to provide Pallier-Singleton with adequate FLT training. The HSE found that he underwent a two-day basic training course in December 2014 -- six months after he is thought to have first started driving the truck. He was not given on the job training and familiarisation training, which are the second and third stages of FLT training recommended in the HSE approved code of practice.

Price said: "He was trained basically on flat surfaces in a warehouse environment. He was never trained to drive a truck in external yard areas or at night time."

The inspector added: "The company had no policy regarding the wearing of seatbelts."

The HSE discovered that several other Vinyl Compounds workers had been injured in accidents that had not been reported to the executive. In 2012, for example, one employee was left unable to work again after he was seriously injured in an incident involving a FLT.

Price said the company had accepted that it had failed to inform the HSE of the earlier injuries but insisted it had adopted preventative measures.

"It was our opinion that they hadn't put sufficient and adequate measures in place and there was certainly a failure to learn from previous accidents. The failure to report the previous FLT accident deprived the HSE of the opportunity to investigate that accident," he said.

After Pallier-Singleton's death, Vinyl Compounds tarmacked its external yard and eliminated all sloping roads and steep boundary edges. It now mandates the wearing of seatbelts and has fitted its FLTs with an interlock system that prevents the driver from operating the truck without the belt being worn.