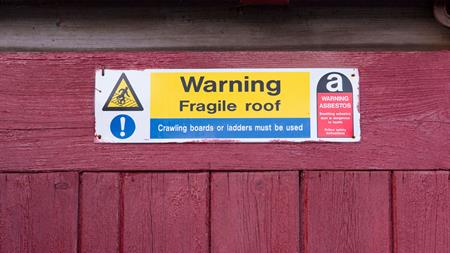 M J Allen Holdings, a metalwork casting and machinery company, failed to provide suitable work at height equipment and did not offer to train its employees, an HSE investigation found.

The three men were working at a height of 10metres, and were using crawling boards on the non-ferrous foundry building, when one of the employees slipped, his foot making a hole in the asbestos roof sheeting.

Ashford, Kent-based MJ Allen Holding, who had ultimate responsibility for safety on site, notified the HSE.

In applying the new sentencing guidelines for health and safety offences that took effect in February, the judge established MJ Allen's level of culpability as medium, a harm category of 2 (seriousness of harm set at A with potential for death or life-limiting injury, and likelihood said to be (medium)). The company's turnover (it had sales of £35m in 2015) put it in the medium category, meaning that the starting point of the fine was £240,000, with a range of £100,000 to £600,000.

The company entered an early guilty plea, so judge Adele Williams set the penalty at £160,000.

As well as the £160,000 fine the firm, which specialises in aluminium, iron and bronze castings, fabrications and machining and is part of a family-owned group, [RE1] was ordered to pay costs of £5,767, for breaching Regulation 6(3) of the Work at Height Regulations 2005. The regulation requires employees to "take suitable and sufficient measures to prevent, so far as is reasonably practicable, any person falling a distance liable to cause personal injury."

Speaking after the hearing HSE Inspector Guy Widdowson said: "This incident had the potential to cause significant, life threatening injuries to the employee who was affected."[RE2]

Widdowson added that the right equipment including harnesses or even the mobile elevating work platform, should have been used when accessing the broken ceiling fan.

Speaking to IOSH Magazine about the sentencing, Simon-Joyston Bechal, director at Turnstone Law said: "This case is a very clear demonstration of one of the unintended inflationary consequences of the new sentencing guidelines. This is that 'near miss' incidents now attract a fine based on the injury that was risked, whereas the previous approach to sentencing was more focused on the seriousness of any actual injury. There are justifiable reasons to have switched to focusing on risk more than on outcome; but the additional inflationary effect on fines was not allowed for by the Sentencing Council in formulating the new tables. That's why this has the feel of being a very steep fine when nobody was injured. If the company had been bigger, with a turnover above £50m, the same sentencing approach would have led to a £400,000 fine (i.e. £600,000 starting point less a third discount for the guilty plea).