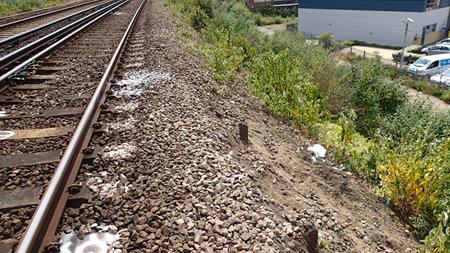 Allen Evans was in "unnecessary danger" as he carried out maintenance work on the Quarry Line, north of the Redhill Tunnel on tracks running between Gatwick Airport and East Croydon, after Network Rail failed to adequately plan and manage the task, Guildford Crown Court was told.

Evans was managing a team of 12 men that had been deployed to fix track weakened by metal fatigue, which they were doing while the line remained operational. This is known as open line working or red zone working, as opposed to green zone working where the track is closed to normal rail traffic.

This section of the rail network is one of the busiest in the UK; 13 trains an hour passed through the work site in each direction during the day. Three lookouts warned the track workers of approaching trains, after which they had 35 seconds to retreat to a position of safety (POS).

The POS was between 1.25 m and 1.5 m from the nearest running rail, complying with the 1.25 m minimum requirement. However, beyond the POS was a steep embankment with a 45° gradient. It did not provide the work group with a firm foothold and they had to either sit down, feet facing down the embankment, or stand with one leg down the embankment, leaning away from the passing trains.

On 24 June 2014, the maintenance work was scheduled to take place between 9 am and 1 pm. Towards the end of the job, the group was warned of a train approaching on the up line and moved to the POS. Evans was still walking along the track with his back to the oncoming train when he was hit and thrown down the embankment.

He was evacuated from the site by air ambulance and taken to St George's Hospital in Tooting, south London, with multiple life-changing injuries, in particular to his right arm and left knee. He has undergone 22 operations since the accident and may still have to have his right arm amputated.

The prosecution was brought by the Office of Rail and Road (ORR), whose investigation found that the maintenance works could have been carried out at night when no trains were running. It said open line working should only occur as a last resort and that "green zone working arrangements were available that week during the night". It said that as a result of Network Rail's failures, "workers were unnecessarily exposed to risks to their safety".

The regulator added that, though the POS was "just acceptable", the narrow, steep embankment "materially compromised" the track workers' ability to use it when trains approached. Some of the work group said they felt uncomfortably close to the trains and found the bank steep.

The safe system of work did not acknowledge the narrowness of the POS or the steep gradient of the embankment; the only additional site-specific hazards it identified were slips, trips and falls.

The investigation also found that the lookout was standing too close to the work group to give a sufficient warning time for approaching trains. Instead of the required 35 seconds, it was only 18 seconds. After the accident, Network Rail implemented electronic radio signal warning equipment to increase warning times.

In a statement the company said: "The accident was directly caused by Mr Evans not remaining in a position of safety and walking into the path of an approaching train without keeping a look out despite having been warned of the approaching train.

"Whilst this was the direct cause [of] the accident, Network Rail acknowledges that there were shortcomings in the planning of the work and the operation of a safe system of work which were not conducted in accordance with required procedures and relevant standards. "

It pleaded guilty to breaching ss 2(1) and 3(1) of the Health and Safety at Work Act, since, though some of the workers were Network Rail staff, others were employed by civil engineer Keltbray or were self-employed. Judge Stephen Climie fined the company £400,000 for each offence on 9 January.