*UPDATE* Line worker cut through own lanyard on electricity pole 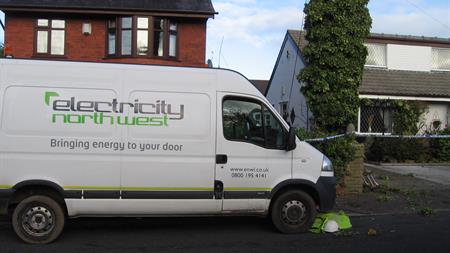 If Electricity North West had planned the operation properly and supervised the safe clearance of the ivy, 63-year-old John Flowers would not have needed to use a ladder to climb the wooden pole to cut away the vegetation. It is believed that, trying to chop through the heavy plant growth, Flowers accidentally severed a lanyard securing his harness to the pole and fell around 6 m.

An investigation by the HSE found that Flowers, an experienced line worker, had been transferred to the utility firm's vegetation management section 18 months before the incident, on Gregson Lane in Hoghton, Lancashire on 22 November 2013.

The Electricity Safety, Quality and Continuity Regulations (ESQCR) require distribution network operators such as Electricity North West to maintain their electrical assets, including ensuring vegetation is cleared away from electricity poles and connecting power lines.

In each vegetation management team, line workers work alongside qualified tree cutters and are responsible for creating safe work conditions for them. The line workers disconnect the electrical power by removing the links (fuses) from a box in the pavement to ensure that the line is dead. The tree cutters will then normally undertake the work at height to remove the vegetation. However, the HSE found that only line workers were deemed competent to work on the wooden poles due to their close proximity to the electrical conductors.

The investigation also revealed that the issue of ivy growing onto the power lines had been identified when Electricity North West carried out a survey in 2008, five years before the accident. Under the requirements of ESQCR, a further "condition" survey was undertaken on the company's assets along Gregson Lane in June 2013 and the information was fed into the firm's database.

HSE inspector Rose Leese-Weller told IOSH Magazine the condition survey identified that "there were lots of areas where the pole needed work and it was covered in ivy. None of this information was passed onto the team carrying out the work in November 2013."

On 1 October 2013, six weeks before the incident, a surveyor from Electricity North West undertook a "vegetation management" survey and recommended trimming the ivy on the pole in Gregson Lane. The survey findings, however, were only shared with the vegetation management team's tree cutters.

"A copy was not given to the linesmen even though they would be cutting the ivy off the pole," said Leese-Weller. "The linesmen got no information about the vegetation survey and what vegetation needed cutting. The only information they received was details of the electrical shut-down that was required."

On 6 November, Flowers and a colleague Barry Bates had visited the lane to identify any potential problems.

"They looked at the link box and Bates identified some problems with it", added Leese-Weller. "But they didn't know about the ivy pole and they didn't see it, so they did nothing about it."
On 22 November, the pair returned to the site with another line worker and a group of tree cutters. The power was disabled and one of the tree cutters pointed out the ivy pole to the line workers.

The HSE found that Electricity North West had provided a mobile elevating work platform (MEWP) for the cutters but not for the line workers.

After the work was pointed out to Flowers and Bates, the MEWP driver took the vehicle 350 m down the road to carry out tree cutting work. Flowers had borrowed a ladder from the third line worker who had left the site earlier, and rested it against the pole. Bates secured the ladder at its base as Flowers climbed to the top but moved away to remove ivy around the foot of the pole after his colleague confirmed he was secure.

"Working up the ladder with a sharp saw that he had been lent by one of the tree cutters, we think that, because the ivy was so thick, he was burrowing his way through and somehow cut through his work positioning strap," said Leese-Weller. "There were two witnesses who said that he slid down the ladder. He wasn't wearing additional fall arrest [equipment], which would have saved him had he been wearing it. That was in another van."

When the case was brought to court, Electricity North West accepted that a MEWP should have been used for the ivy clearance. "The work was identified as taking at least an hour, probably two hours, so it wasn't short duration work and it wasn't suitable to be carried out off a ladder," explained Leese-Weller.

"Electricity North West knew about this work at least six weeks before the accident and they could have planned the use of a MEWP in; the fact it was allowed to go ahead off a ladder indicates that the work wasn't properly supervised either."

On 23 March, the jury found Electricity North West guilty of breaching the Work at Height Regulations but cleared it of the two remaining charges.

Sentencing on 31 March, Judge Robert Altham highlighted a "persistent" and "systemic failure" in the firm's system for planning for such operations.

"In his summing up, he did say that while it was recognised that they had a suitable and sufficient risk assessment, a risk assessment should only form part of the planning process," said Leese-Weller.

Judge Altham determined that the culpability was high. The seriousness of the harm risk was within level A and the likelihood of the harm arising was low (harm category 3)

Due to time pressures on the court, the costs will be determined at a later date.

Electricity North West has issued a statement following the sentencing. The firm says it is considering its options, which may include an appeal against the guilty verdict.

Chief Executive Peter Emery said: "John was a valued colleague with over 30 years' service to the company. His death was a tragic loss to his family and to his colleagues. We were devastated by his loss.

"Working at height with electricity brings unique risk and safety is a continuous challenge. In finding us not guilty on two charges, the jury recognised the effectiveness of our risk assessment process and our compliance with the Health and Safety at Work Act through our safe systems of work."