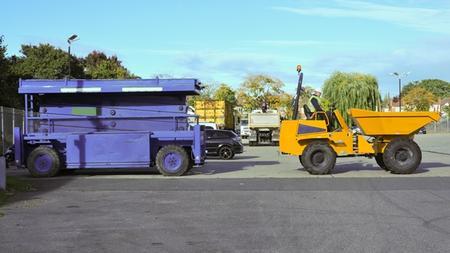 The company failed to ensure that the workers had a permit to use the vehicle and did not properly oversee and manage the operation.

The Health and Safety Executive (HSE) investigation found that siblings Paul and Philip Griffiths were nearing the end of their shift in the early hours of 2 October 2014 when the accident happened at the site of a new multi-storey car park at Heathrow's Terminal 2.

As airport operations ramped up at the start of the day, a team of night-shift workers, including the Griffiths brothers, was called to deal with a scissor lift, which had broken down and was blocking Cayley Road, a service road close to the car park's ground floor.

The HSE found that the power supply to the wheels on the scissor lift had failed and as a result the wheels were locked, needing an engineer to unlock them. As airport operations were due to start, the most practical solution was to call for a driver to collect a dump truck from the holding area where the firm's construction equipment was stored and tow the scissor lift. A competent driver had been called but was feeling unwell and, as his shift was ending, he refused. Philip Griffiths, who was not authorised to drive the dump truck, collected the vehicle and brought it to Cayley Road.

In the inquest to Philip Griffiths' death, held at West London Coroner's Court on 13 June 2016, Ieuan Evans, a machine operator for Select Plant Hire -- a Laing O'Rourke subsidiary, told the court that he had been involved in initial attempts to tow the scissor lift away but had then left the scene, on the understanding that an engineer was being called.

In the inquest, reported by Get West London Evans said that he thought that the Griffiths brothers were also leaving, but then realised they were not and assumed they were "giving it another go".

At the inquest, Paul Griffiths said his brother had attempted to tow the scissor lift with the dump truck before he took over, and that he was not aware of anyone telling them to stop. The HSE investigation found that the site manager had left the scene by the time of the incident.

When the incident happened, Philip Griffiths had shortened the strop that connected the dump truck to the scissor lift. His brother was operating the vehicle when his foot became stuck between the brake and the accelerator. Philip Griffiths was standing between the truck and the scissor lift and was fatally crushed when the truck suddenly reversed. He was pronounced dead at the scene.

The HSE found that neither worker had a permit to operate the dump truck and that Laing O'Rourke had failed to properly oversee and manage the operation.

Laing O'Rourke Construction of Crossways in Dartford, Kent, entered an early guilty plea on the 14 December 2016 at Westminster Magistrates' Court to breaching reg 22(1)(a) of the Construction (Design and Management) Regulations 2007.

At Southwark Crown Court, Judge Nicholas Loraine-Smith determined the company's culpability as medium, with a harm category of 1 (a high likelihood of harm). Laing O'Rourke had systems but they were not sufficiently adhered to. In mitigation, he took into account the firm's acceptance of responsibility and its high level of co-operation with the HSE.

Laing O'Rourke's turnover placed it in the large organisation category range, with a starting point of £1.3m and a category range of £800,000-£3.25m. Taking into account the firm's early guilty plea, Judge Loraine-Smith reduced the fine by one-third and ordered Laing O'Rourke to pay £800,000 with £10,000 in costs.

HSE inspector Jack Wilby told IOSH Magazine that since the incident Laing O'Rourke had improved its systems for reporting, recording and checking the training records of operatives on site.