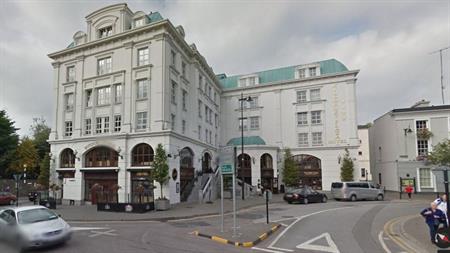 RTÃ, the Republic of Ireland's national television and radio broadcaster, reported that five members of the Meehan family from County Meath were attending a cousin's wedding and were inside when the lift fell four floors and hit the end of the shaft. Three were seriously injured.

On 2 March, Tralee Circuit Criminal Court heard that Ellickson Engineering's installation for the refuge space safety system in the inspection pit at the bottom of the lift shaft failed to include critical components required to ensure a safe minimum space between the base of the lift and the pit. The lift could have crushed anyone in the pit carrying out maintenance work.

The omission came to light when the Health and Safety Authority (HSA) investigated a lift failure at the Killarney Plaza Hotel on 9 July 2011 that dropped the five guests about 5.85 m to the hotel's basement level.

RTÃ reported that Andrew Meehan suffered convoluted fractures to his left tibia, a broken right tibia and crushed right heel. His wife suffered a dislocated bone, which broke through the skin and was twisted at an unnatural angle. His brother suffered broken vertebrae and fractured left ankle and right heel.

The broadcaster also reported that it took up to 15 minutes before staff at the hotel realised the lift had crashed to the basement and the doors were prised open. There was no mobile coverage in the basement and the lift phone was broken. It took an hour before ambulances arrived and one of the injured members had to be cut out of the lift.

The HSA found Ellickson Engineering had installed the lift in 2004. The Irish Independent reported that the lift had special features for a refuge space so it could be safely maintained. However, lift specialist Simon Nicholas Lancaster had told the three-day trial that wiring, brackets and switches in the electrics for the lift had not been installed.

The company did not appear in court and did not send a representative. Director of public prosecutions Tom Rice said that, as a limited company, the case would proceed "as though the company had entered a plea of not guilty".

The firm, which is in receivership, was found guilty of a charge under s 10 of the Safety, Health and Welfare at Work Act 1989.

Brian Higgisson, HSA assistant chief executive, said: "All lifts when installed must have the required safety features included and those with the responsibility for the installation process must ensure that this is the case. The consequences of failing in this duty, as we have seen, can be extremely serious."