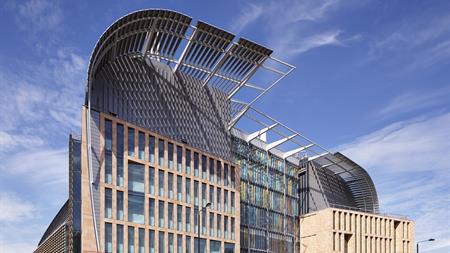 Richard Laco, 31, had been contracted by architectural metalwork specialist CMF to install six steel staircases at the biomedical research centre, which opened last year and where Laing O'Rourke was the principal contractor.

Each staircase was made up of between 50 and 60 pieces and CMF operatives had already successfully installed two of them (units A and F).

They had used eyebolts in order to securely attach slings around each section and connect it to a tower crane that lowered the components into the building. The workers had then then manually manoeuvred each section using taglines while an electric hoist lifted the units into position.

The workers had begun to erect the third staircase (unit D) on 6 November 2013. Unit D's dimensions were different from the previous two, and each section was much heavier.

During the installation of a wedge-shaped landing, the operatives had not attached the load to the slings. As the hoist moved it to a vertical position, the slings came away from the thinner edge. It fell between 2 m and 3 m and crushed Laco to death.

The Health and Safety Executive (HSE) found that CMF had failed to implement a safe system of work for fitting the staircase.

HSE inspector Stephen Farthing said: "The main area of concern was that [CMF] didn't have the slings physically attached to the landing. Unit D was a different shape and CMF should have revised its method statement to reflect this.

"CMF are not some rogue organisation. They had method statements, they had risk assessments and they had systems in place -- they just weren't specific enough for operatives to understand them. The operatives simply did what they thought was best. On the whole, Laing O'Rourke ran the site very well."

After the accident, CMF revised its method statements to provide its workers with clearer guidance and the three remaining staircases were installed without further incident.

CMF, whose construction portfolio includes the new Wembley Stadium, the O2 Arena, Lord's Cricket Ground, and terminals 1 and 5 at Heathrow Airport, pleaded guilty to a breach of s 3(1) of the Health and Safety at Work Act at the earliest opportunity in the magistrates' court.

The company was fined £185,000 plus £20,606 costs at Southwark Crown Court last month after the judge determined that its culpability was high and the harm category was 1. Under the sentencing guidelines it is classed as a medium organisation (turnover of £17m), putting the starting point for the fine at £540,000. This was reduced once its early guilty plea and full cooperation with the HSE were accounted for.

In its health and safety policy statement, CMF notes: "It is the company's policy to ensure the health, safety and welfare of everyone engaged in, or affected by, its activities. In particular it emphasises the need to eliminate hazards before health is compromised and accidents occur."