*UPDATE* Foundry had no SSoW for bracket casting 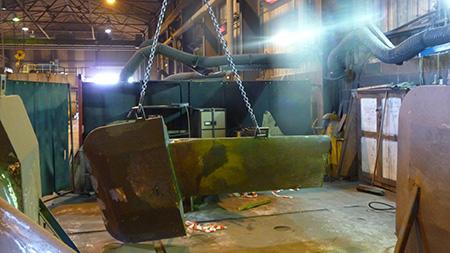 Health and Safety Executive (HSE) inspector Natalie Tinsley told IOSH Magazine that it had not been made clear to workers that they could use an onsite crane to support heavy shaft brackets during work at the former Tow Law factory in County Durham.

As a result, the injured worker fashioned three support legs from scrap metal which he welded on to the bottom of a 2.8 m x 1.3 m piece of steel.

One of the support legs gave way in November 2014 and the 2.5 tonne metal part fell on the 57-year-old welder. He spent three weeks in hospital, where his leg had to be amputated above the knee.

Tinsley served an improvement notice on Bonds Foundry after her investigation found it had not carried out a risk assessment nor provided a safe system of work. There was also a lack of supervision on site.

"[The company] hadn't risk assessed that job so everything that comes after didn't happen. The management thought the crane should be used but there wasn't a safe system of work and this hadn't been communicated to their employees," she said.

"Using the crane would have been a safe system of work but the instruction wasn't passed down to the employees for them to do that."

After the accident Bonds Foundry implemented a cradle system to support the steel castings.

The company pleaded guilty to breaching reg 3 of the Management of Health and Safety at Work Regulations for not putting in place a "suitable and sufficient assessment of the risks to which employees were exposed when working on shaft bracket castings without the appropriate use of lifting equipment to support the bracket during this work", according to daily newspaper The Northern Echo.

At Durham Crown Court on 29 January, the judge determined Bonds Foundry's culpability as being low and said the harm category was 2. Under the sentencing guidelines, it is classed as a small organisation (£6.7m turnover in 2017). After factoring in its good safety and health record, subsequent remedial measures and early guilty plea, the judge fined Bonds Foundry £21,000 and ordered it to pay costs of more than £23,400.