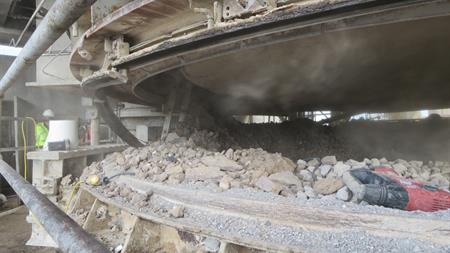 The Health and Safety Authority (HSA) investigation found that workers at Premier Periclase's plant at Drogheda, County Louth should not have been allowed to climb onto the preheater's turntable to break up the heavy overhead limestone blockages. The regulator also concluded that a suspended scaffold should have been erected in the preheater's upper level to ensure workers were stationed above the blockages. Instead, a ladder had been used, which also presented a high fall risk.

Dundalk Circuit Criminal Court heard that on 30 October 2014, production section chargehand Paddy Lambe and three general operatives were called to clear the limestone chunks, which had built up in the 30 m preheater vessel, as part of a routine maintenance programme.

Premier Periclase manufactures a product known as "dead burned magnesium oxide" (MgO), also known as Periclase, which is used to make refractory bricks for lining high temperature furnaces in the steel and glass industries. The magnesium has a high melting point and is chemically unreactive, making it ideal for this application.

The production process uses locally-sourced limestone and seawater as the raw materials. The limestone is heated in the preheater vessel and connecting lime kiln to 1,200 degrees Celsius and then mixed with water and seawater salts before a further high temperature process creates the magnesium oxide.

On 25 October, the lime kiln and preheater were shut down to allow the production section to carry out the limestone blockage clearance.

The court heard how the production section team normally stand outside the preheater vessel and use long chisel bars inserted through portholes in the vessel's walls to knock any blockages down onto the hydraulic turntable level situated halfway down the vessel and into a discharge chute.

During normal operation, the vessel is closed. However, when the shutdown takes place, the plant's maintenance section operates four hydraulic rams to lower the turntable, revealing a 75 cm opening. This allows the operatives in the production section to sweep any fallen debris off the turntable into the central discharge chute. To complete the sweeping task, operatives often climb onto the turntable to get to hard-to-reach debris. Standing on the turntable, operatives can also check for refractory damage on the preheater's internal walls.

At 3pm on the 30 October, Lambe and one of the operatives climbed onto the turntable inside the preheater vessel while the remaining operatives remained outside at the turntable level. Lambe placed a 2.7 m aluminum ladder on the turntable, resting against the preheater's internal "cone". After climbing the ladder, he asked one of his co-workers for a 1.2 m scaffold plank to stand on and a long chisel to break up a stubborn piece of blocked limestone.

The court heard that Lambe rested the scaffold plank on an internal metal fin and the top rung of the ladder and then, standing on the plank, used the chisel bar to chip away at the blockage, which was just under a metre away.

HSA inspector Frank Kerins told IOSH Magazine that "according to one of the co-workers, the stubborn blockage was approximately one metre wide by 2 m high and was at Lambe's face level. Lambe called down from the top of the ladder to one of his co-workers, who was standing on the turntable to 'take a few steps back and to tell the two other men to do likewise'."

The co-worker stepped back but remained standing on the turntable while Lambe continued to chip away, assuming the blockage would fall away from him and onto the turntable.

Kerins told IOSH Magazine that, according to the witnesses, there was a sudden noise followed by a large cloud of dust and falling debris. When the dust cleared, Lambe was hanging upside down, his legs on the fin. He was pronounced dead at the scene.

Premier Periclase, a subsidiary of Austrian company RHI, pleaded guilty to breaching s 8(2)(e) of the Safety, Health and Welfare at Work Act 2005 contrary to s 77(9)(a) at an earlier hearing before Judge Michael O'Shea sentenced the company on 4 May.