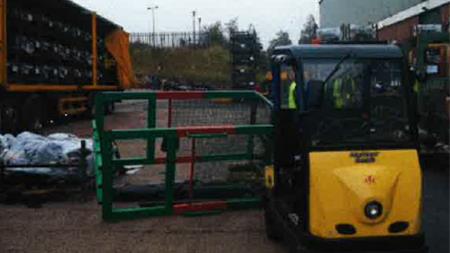 Under a service agreement with DHL, the logistics giant audited incoming deliveries to JCB's headquarters in Rocester, Staffordshire, before the components were sent to the factory's vehicle assembly line.

On 16 October 2013, a DHL teletruck operator unloaded two stillages of gearboxes from a curtain-sided container truck on the north yard so they could be audited by his colleague, Michael Addison.

At the same time a JCB employee, Justin Coates, was using a Bradshaw electric tug to transport a 770 kg sequence trolley loaded with six hydraulic rams through the north yard to the sub-assembly area.

To avoid several pallets that had been stacked outside the designated area of the yard, Coates took a sharp turn to the left. This caused the rams, which had been hung from the top of the trolley, to swing out to the right, like pendulums.

They struck Addison from behind as he was checking serial numbers on the consignment of gearboxes. The sideways motion of the rams caused the trolley to tip on to him and he was crushed between it and one of the stillages.

Health and Safety Executive (HSE) inspector David Brassington said: "The variation of longer and shorter rams on the trolley is relevant because it's the centre of gravity of the load that's critical for stability.

The trolley had not been fitted with a sway bar, which would have prevented the rams swinging out and striking Addison.

The HSE's investigation also found that, although Coates had been booked in for training on driving the Bradshaw tug, this had not yet happened.

Addison sustained two broken ribs, three fractures to his back, a laceration above the right eye, and damage to his spleen and an artery.

"[The north yard] was a busy area; there were an awful lot of moving vehicles there," Brassington said. "Somebody at some point should have taken a proverbial step back and said, 'We've been asked to do this auditing activity. Can we physically do [the auditing] in that area or should it be at the point of dispatch?'. Nobody did that so Mr Addison was introduced into a high-risk environment. On 16 October that risk was realised."

Sentencing the companies at Stafford Crown Court on 5 May, Judge Michael Chambers said principal failures by both defendants caused the accident.

The judge said JCB had failed to carry out a specific risk assessment for the auditing task "or to ensure that such assessment was carried out by DHL as JCB retained overall responsibility for the north yard, being part of its factory premises".

He added: "It was submitted that JCB were entitled to simply rely on DHL to carry out a suitable risk assessment for the task. That submission ignores the fact that JCB retained responsibility for the north yard and owned a duty of care to its users when they knew or ought to have known the level of vehicular and pedestrian traffic."

Moreover, JCB had not provided proper training to the Bradshaw tug operator, failed to implement a safe system of work for transporting the rams, failed to separate pedestrians and vehicles, and failed to ensure that stillages and pallets were stored in the designated storage areas so that the movement of vehicles would not be impeded.

The judge determined that DHL's failure to risk assess the auditing work that was being carried out by Addison and failure to ensure there was adequate separation between pedestrians and vehicles in an area known to be busy with traffic had also led to the accident.