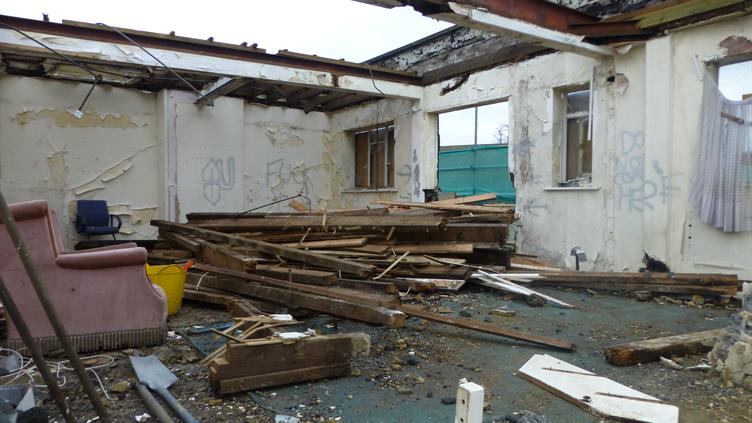 In October 2016, a member of the public raised concerns about conditions at the building site in Mitcham, south London and alerted the HSE.

He told IOSH Magazine: "I entered the building and noted that it had been partly demolished and that debris was lying around the site. When I asked if there was any asbestos in the building I was told there wasn't but they could not tell me why they knew this. Due to this and the unsafe work at height I immediately prohibited work at the site."

The HSE subsequently identified that asbestos was present in the building but the workers had not disturbed it. "They didn't know it was there, the owner had not carried out a survey and no one had asked about asbestos being on the site," said the inspector.

Verrall-Withers served two prohibition notices on the contractor for asbestos and work at height. He also served two improvement notices on the property's owner Selliah Sivaneswaran, one to provide welfare facilities and the other to secure the site.

Sivaneswaran hired a professional company to remove the asbestos. However, no work was allowed until he had resolved the work at height. "Effectively, they were going up on the roof and demolishing by hand without any scaffolding or [fall protection] measures," said Verrall-Withers.

At this stage, the contractor pulled out of the project. "He was no longer involved in the project, which meant that technically he couldn't have breached the notices served on him," said the inspector.

When the inspector returned in November, Sivaneswaran had put up fencing to prevent public access to the site and, although no welfare had been provided, no work had been carried out since the HSE's first visit.

Verrall-Withers provided the owner with written advice on his duties and where he could obtain guidance. He also strongly advised the owner to contact him before any further work took place and before engaging another contractor.

Verrall-Withers said that he revisited the site several times and found no activity. However, on 3 January he received a phone call from the same complainant informing him work had restarted and the standards were still poor.

The next day, the inspector returned and found that demolition work had continued. Sivaneswaran had paid cash to untrained migrant workers, who had climbed on to the unguarded roof and thrown debris down with their hands. They were at risk of falling up to 4 m through holes in the floor and from the partly-demolished staircase.

Verrall-Withers said the worker supervising had now been engaged as a contractor. "Sivaneswaran hadn't appointed anyone in writing," he said. "I had already written to him and said that the worker supervising, who I'd met in October, had no health and safety training, had been working dangerously on the roof and should not be left to supervise the work".

The inspector added that Sivaneswaran had not appointed a principal contractor. He had also failed to engage a site manager and provided none of the required site documentation. He served a prohibition notice, closing the site down until a suitable contractor was appointed.

Selliah Sivguru Sivaneswaran, of Harlyn Drive, Pinner, pleaded guilty to breaching reg 13(1) and 4(1) of the Construction (Design and Management) Regulations 2015 at an earlier hearing at Westminster Magistrates' Court on 25 July but the judge delayed the sentencing to 30 August, so he could consider the case and to give Sivaneswaran time to provide financial records.

Two days before the August hearing, Verrall-Withers was alerted that the fencing securing the site had been removed, allowing public access to an unsafe site. On arrival, he found the site was not secured and some demolition work had been carried out since 4 January, after work had been prohibited.

He said that the work was probably carried out before the defendant had pleaded guilty in July but the removal of the fencing was recent and the prosecution introduced it as an aggravating factor: "It was unusual. Someone had had a case put to them, had pleaded guilty and then committed a further related offence at the same site," he said.

The judge fined Sivaneswaran £200,000 and ordered him pay £1,421 in costs. Verrall-Withers said that the judge had told the court that had anyone been injured or worse, the defendant would have faced a prison sentence. The fine reflected Sivaneswaran's early guilty plea and the fact that it was his first offence.

The inspector said that the defendant's lawyers had laid out 11 points of mitigation. Other than accepting the early plea, the prosecution challenged all the points as "not being matters that could be considered mitigation" or "being factually untrue". An example was that Sivaneswaran had not obstructed the investigation by hiding evidence.

"I suggested to the judge, 'That isn't mitigation any more than saying, the police pulling me over for going through a red light, and in mitigation I didn't drive off and take them on a high-speed chase'." The judge rejected all of the mitigation that was challenged by the prosecution.