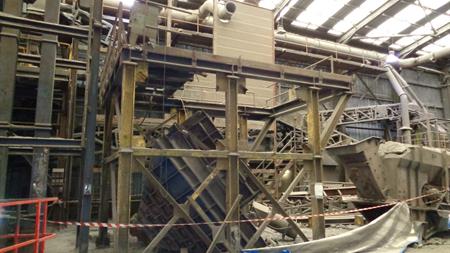 "There was a crane on-site and Befesa understood that this was going to be used to provide the support for a large [metal] hopper, so it could be cut away from the structural steelwork holding it and lifted to a place of safety," Owen said.

For reasons unknown, Porvi did not follow this [safe] system of work and instead allowed Jose Luis Santos Canal, a company employee, to use flame cutting machinery to cut through the steelwork on the unsupported hopper.

The machinery part collapsed and a ventilation pipe struck Canal, who was working on an elevated section around the hopper, knocking him to the ground. His colleagues lifted the hopper off Canal but he died at the scene.

"Although he had a fall-arrest harness on, he wasn't clipped on. In fact, there was nothing up there that would have been suitable to attach it to," said Owen.

The PC could have erected a scaffold with adequate edge protection or used the cherry-picker that was available for the cutting work. "Sadly, what Canal did was a bit like sawing through the branch he was sitting on," she said.

The investigating team found no evidence of Befesa "actively monitoring what was going on".

"There wasn't any restriction for staff to stop them from entering that part of the plant," she said. "Had anyone that had been working at the site wanted to wander in and have a look, they could have, which is what prompted us to bring both ss 2 and 3 charges [under the HSW Act] against [both companies]."

After the fatality, Porvi withdrew its employees to Zamora in northern Spain and was convicted in absentia. The Spanish firm offered no plea when the case was brought to Caernarfon Crown Court for a week's trial, starting on 12 October.

"The absurd thing was there was no defence but the judge had to hear all the evidence from us," said Owen.

She added that, from the moment the incident happened on 14 July 2015 until the sentencing hearing on 30 November 2017, the HSE had tried to establish contact with Porvi but "they snubbed us".

Owen said that the HSE took a pragmatic approach to prosecuting Porvi and treated the Spanish firm as a medium business.

"There was absolutely no financial information available about them at all even though they should publish their financial records on the Spanish system," she said.

"What was important to us is that a man died and we felt it was really important that we got a conviction against this company because they could come back to the UK and try and do other work.

"It was an unusual trial but it needs to sit there on record that Porvi was fined £3m for causing a man's death."

Owen explained Befesa has a sister company in Valladollid in northern Spain. The HSE was led to believe that Porvi's work for this firm was the probable link and resulted in Porvi's bid for the UK work in Wales.

Befesa Salt Slags, which specialises in the recycling of steel dust, salt slags (a byproduct of aluminum recycling) and other aluminum residues, pleaded guilty at the first opportunity to the two charges (see table for Judge Huw Rees QC's application of the sentencing guidelines).

Sentencing Porvi, Judge Rees said he had chosen the "highest harm category" and described the firm's actions as "a wholesale failure and flagrant disregard [for safety]".

He added that there was a significant cause of actual harm, which had been "aggravated by cost-cutting at the expense of an employee. I cannot give them any credit or reduction".

The judge concluded: "The primary breach lay with Porvi and not Befesa. However, they should have been much more diligent, having awarded a contract to Porvi."

He accepted that Befesa was a loss-making company and set the fine at an appropriate level for a company in its position. He also considered its good safety record and the fact that the firm had expressed contrition.

In a second, related, prosecution against Befesa, the HSE had carried out a site inspection and found that the firm had failed to report that two of its employees had been diagnosed with hand-arm vibration syndrome in early 2015 and that a young worker had been scalded in 2014.