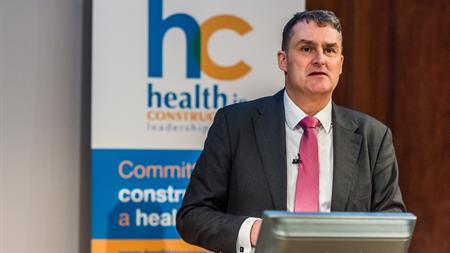 With pump-priming funding from the British Safety Council, Mates in Mind has been registered as a charity and will coordinate a tiered training package targeted at managers, supervisors and operatives. The industry-led initiative is supported by the non-profit company Mental Health First Aid, the mental health charity, Mind, and the Samaritans. The construction industry charity the Lighthouse Club will also offer support through a confidential helpline.

Launching the programme at the Royal Institution of Great Britain in central London on 26 January, Steve Hails, director of health, safety and wellbeing at the Tideway sewer project and chair of the Mates in Mind board, called on the representatives of the UK's construction companies attending the event to commit themselves to the initiative. Attendees included OSH heads from Balfour Beatty and Skanska.

Describing Mates in Mind as "one of the worst kept secrets in the industry", he reminded delegates that the construction industry had called for a consistent approach to tackling mental health at the HCLG's "commitment to action" seminar in April 2016 and the new initiative aimed to provide such an approach.

The programme will be piloted from February in five organisations: airport operator Heathrow, Tideway and contractors Balfour Beatty, Careys Group and Wilmot Dixon before a formal roll-out in the wider group of HCLG members after an evaluation.

Speaking to IOSH Magazine, Michael Whitmore, programme lead for Mates in Mind at the British Safety Council, explained how the pilots were chosen. "Partly it was logistical. They are operationally ready to do so. They are strong brands, they are part of HCLG, and they are able to provide some funding to move forward on the initiative."

The charity said delegates will be asked to evaluate the training after each course and responses will be fed back to inform further development. Mates in Mind has also set up a partnership panel of its mental health partners, who will also review the training and assess its effectiveness.

"We are here to develop that evidence base for the construction industry and to move it forward," said Whitmore. "Also, one of the reasons why we've designed the programme as it is, is because we've got strong existing partners that have delivered training in these areas for a long time -¦ Mind, Mental Health First Aid and Samaritans already have a strong evidence base for what they do and we've brought that safe approach to the industry."

Mental Health First Aid will provide a two-day programme to train volunteer champions in construction businesses to provide immediate support for workers suffering from mental ill health and direct them to specialist help. For more about mental health first aid training in IOSH Magazine's feature "A Mate in Need".

The second tier, provided by Mind, is a 3.5-hour course aimed at supervisory roles and is designed to raise awareness of mental health issues so that supervisors and line managers understand how they can contribute, can identify the signs to watch out for and where to signpost for assistance.

The final tier, which will "begin the conversation" aims to ensure that all operatives receive general awareness training in a 45-minute session run by the British Safety Council.

"It's about raising awareness so that people in the industry know it exists and that there are individuals who can provide support and direction for those that are suffering from mental ill health," said Hails.

Whitmore added that Mates in Mind would also be working with the Samaritans and has partnered with the Lighthouse Club to offer a helpline.

"Everybody is in a different situation and point in time," he explained. -¦ Sometimes it's appropriate to be talking to people at work, other times it might be something about work or about that person that you can't speak to them about. People need to feel able to start that conversation about mental health."

HCLG plans to launch extra training on suicide prevention later in the year. Research by the Samaritans and the Centre for Mental Health among others, estimates that construction workers could be 10 times more likely to die from suicide than from on-site accidents.

The UK construction sector employs 1.2 million workers and the HCLG estimates that some 350,000 employees will experience a mental health problem at any one time.

Hails said that the HCLG and its partners had set ambitious targets for the programme, including ensuring that 100,000 workers go through the programme in its first year. Further ahead, he said the ambition was to make sure that 75% of the construction industry have received information on Mates in Mind by 2025.

Mates in Mind is modelled on the Australian Mates in Construction initiative, which was set up in 2008 to tackle the high number of suicides in the industry. The UK approach, however, offers a proactive and broader approach.

Speaking to IOSH Magazine, Mike Robinson, chief executive of the British Safety Council, said: "What became clear quite quickly was that simply bringing Mates in Construction to the UK wasn't the most sensible option. The biggest difference was the maturity of the mental health capabilities in the UK. Everyone knows that the Samaritans have a phone line for people who feel at risk of suicide and that didn't exist in Australia. They had to build the support networks. Mates in Mind is focused more on improving the overall mental health of workers in construction."

Robinson said that while the construction sector in the UK had driven Mates in Mind, the long-term aspiration was to extend the programme to other industries. He also said that the programme would need to be adapted for small-to-medium-sized enterprises (SMEs).

"People talk about the sector [but you have] Balfour Beatty with its 20,000 employees and a little SME with 15 employees. They are both the industry and how it works in one is going to be very different to another. As we roll out and get to smaller organisations, we will almost certainly have to adapt and evolve the programme."

Robinson reiterated the importance of evaluating Mates in Mind.