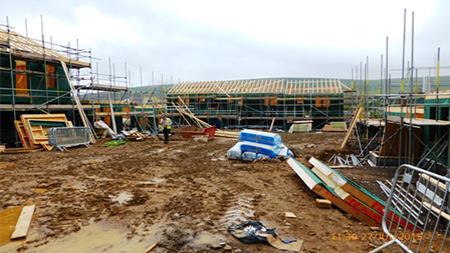 South Wales-based J G Hale Construction was building 54 timber-framed houses and flats on the site of a former primary school in the town of Blaenavon. Work began on 24 October 2014 and was due to finish in January this year.

The Health and Safety Executive (HSE) inspected the site on 27 July 2015, and found fire safety failings and a failure to control the risk of pedestrian workers being hit by construction vehicles, including a large materials handler, a dump truck, tracked excavators and delivery lorries.

Cwmbran Magistrates' Court heard there was a walkway down the middle of a street that was under construction, yet contractors did not use it and routinely walked on roadways meant for construction plant. There were not any other pedestrian walkways.

J G Hale also failed to meet the fire control standards required on timber-frame projects. Workers smoked in and around timber structures and carried out hot-work such as soldering with blow torches without proper management control. The company did not have a controlled materials delivery system that would have avoided excessive fire-loading, while large amounts of combustible waste materials, including dry sawdust, had accumulated.

There was no proper fire risk assessment nor was there a construction phase health and safety plan that complied with Regulation 12 of the same regulations. The HSE said it did not find any evidence that the site's manager and his contract manager and been adequately trained about fire safety.

The HSE issued J G Hale with improvement notices for fire and vehicle safety, which it complied with after two further inspections.

The HSE said it had issued the company with four prohibition notices and three improvement notices since 2008.

J G Hale pleaded guilty to breaching Regulations 27(1) and 29(1) of the Construction (Design and Management) (CDM) Regulations 2015. For failing to ensure pedestrians and vehicles could move without risks to safety and not preventing the risk of injury from a fire or explosion.

J G Hale pointed out that it had commissioned an expert report - known as a Milner Report - dealing specifically with the risk of fire spread outside the site boundary before works began, has been involved with building timber-framed buildings on over 60 sites over the last three years without any incident of fire or other reportable accident and, during this period, employed around 100 employees and 150 subcontractors. It also said that it spends £150,000 a year on health and safety and adds 1.2% to its tenders to cover this expenditure.

In his written judgement, judge Richard Williams, who also sits on the Sentencing Council, set out precisely how he applied the sentencing guidelines for health and safety offences. On culpability, harm and likelihood of harm relating to vehicles on site, he wrote: "There was no segregation of people from vehicles and the failure to do so was a failure which fell far below the standards of the industry; but this was not, in my judgment, a case of flagrant disregard and it does not fall into the very high category. Culpability is high.

"I cannot exclude a risk that an employee would have been killed by a vehicle being driven onto or off the site, but it seems to me that the seriousness of harm risked is most appropriately categorised at Level B. Exposure to risk would be confined to those working in the proximity of the vehicle concerned and that number, in these circumstances, would be low. There is no evidence of actual harm having occurred and no evidence of 'near miss' or any complaint by a member of the workforce. That said, vehicles entering and leaving the site would be a commonplace occurrence and, in my judgment, I should conclude that the likelihood of harm should be regarded as a medium likelihood of harm."

Judge Williams found that the culpability of the defendant in relation to fire on the site was high. He wrote: "I am sure that this was a site where the defendant fell far below the appropriate standard inasmuch that it did not put in place measures meeting recognised standard within the industry." He said that J G Hale failed to enforce a site-safe smoking policy, permitted hot works in unsafe conditions and failed to implement a working housekeeping system.

He added: "[The company failed] to implement or maintain an effective system to control the substances, processes or equipment which contractors could (or could not) use and which could increase the risk of a fire starting or the rate at which it could spread and failed to devise, implement or maintain any - or any effective - system to assess emergency arrangements in connection with fire; to provide adequate firefighting equipment, alarms or detection systems or organise a fire watch."

He continued: "As to harm, I am sure that had a fire occurred, in the circumstances depicted on 27 July 2015, there is reason to fear that the spread of fire would have been rapid because of the proximity of combustible materials and waste, insufficient fire extinguisher points and the apparent absence of any mitigation of spread by reason of phasing construction.

"Part 5 of the Milner Report set out additional items to consider in fire spread risk mitigation on site, these included the provision of alarms; that the site would be a tidy and organised site; that site facilities provided convenient safe site smoking huts with safe and adequate disposal facilities for cigarette end and that there would be site staff escape routes. As at 27 July 2015 the defendant's site did not meet these conditions.

"In particular, some escape routes were reported to be blocked or obstructed; there were no suitable and sufficient alarms and only six fire extinguisher points where there should have been 20. The Defendant did not follow the steps recommended by the expert it had itself commissioned."

The company received a 33% fine reduction after it pleaded guilty at the first reasonable opportunity. It was fined a total of £100,000 for the two offences and ordered to pay prosecution costs of £4,634.

After the hearing, HSE inspector Liam Osborne said: "Hale Construction had been given plenty of warnings about fire safety and traffic risks in the recent past, including from the HSE. Timber-frame houses are perfectly safe once they're finished and protected, but when under construction they can be very dangerous. Stringent fire safety standards need to be in place well before the build starts, and then maintained and monitored."