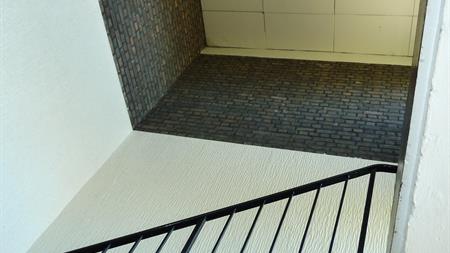 As we reported earlier this week, David Spurgeon was in the roof void of a block of flats in Tower Hamlets, east London on 17 May 2011. He was fixing a reported telephone fault in a distribution point when he lost his balance and fell through the fragile ceiling tiles. He managed to hold himself suspended for a short while before dropping 7 m onto the concrete stairwell below.

A Health and Safety Executive (HSE) investigation found management failures by BT that included inadequate planning of work taking place near fragile surfaces and neglecting to check that the work was being carried out safely.

"We discovered that there were two distribution points in the loft and both were located above fragile surfaces," HSE inspector Kevin Smith told IOSH Magazine. "BT also told us that there were yet more distribution points in similar locations on this estate so there was the potential for the same thing to happen elsewhere. From our point of view they were in a dangerous location."

The engineers were not aware of where the distribution points were located prior to arriving on site and Spurgeon did not identify that the task was a two-person job.

In court, BT said it has a good health and safety record, spent £75m a year on health and safety and provided its engineers with extensive training and instruction. It pleaded not guilty and attempted to blame the engineer and his colleagues for the incident.

Judge John Bevan QC said in response to this: "Mr Spurgeon and other colleagues were accused of being unreliable and milking his condition for the court's benefit to do as much damage as possible to BT. This attack -¦ were in my judgement and clearly the jury's judgement not necessary, misplaced and unfortunate. The company tried to avoid responsibility in an unfortunate way," Court News UK reported.

The judge determined that the culpability was medium, under the new sentencing guidelines for health and safety offences, and the seriousness of harm risked was level A. BT was fined £500,000 and ordered to pay costs of £98,914.

Last month BT was fined £600,000 after two Openreach engineers were seriously injured in falls from height at the company's own telephone exchange in Darlington.