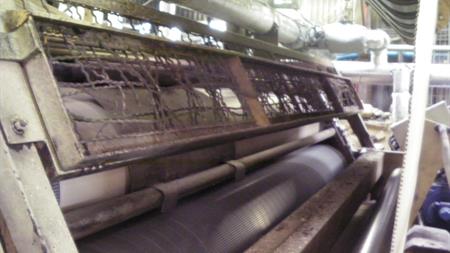 Under the sentencing guidelines the court could have set the penalty as high as £2.5m but the company's poor trading position and swift remedial action led to a more lenient sentence.

On 18 September 2014, HSE inspector Robert Hassell visited the cardboard box maker W E Roberts (Corrugated)'s Northfleet premises after the company's former health and safety officer tipped off the executive to poor safety practices. On arrival, the manufacturer's then current health and safety manager backed up the complaint and Hassell served eight enforcement notices after identifying problems with machine guarding and the storage of materials.

"I spoke to the director about what I had found and how disappointed I was because they have a history with us and they should have been better," explained Hassell.

On 19 February 2013, the HSE had served the company with an improvement notice for failing to manage the risks from asbestos in the premises. The company complied with the notice on 26 April that year.

The breaches included unsecured cabinet doors that exposed unprotected three-phase electrical conductors in a switch room that was open at the time of inspection; a damaged and open guard on the corrugator and an open door in the corrugator, which contained unprotected three-phase electrical conductors on a control. They found five other panels in a similar condition.

"The specialist's report said, 'if you touch three-phase electrics, you've not got a lot of chance of coming out of it [alive]'," Hassell told IOSH Magazine.

As Hassell was leaving the premises, he discovered that an external consultant who specialised in corrugated machinery guarding had been on the site on 8 January 2014. "I got his report and his photos and a lot of my notices reflected the recommendations he'd made for improvements," added Hassell.

"He'd emailed his recommendations through to the two existing health and safety managers and the director in January along with some industry guidance on corrugator safety so they were fully aware of what was required."

W E Roberts complied with the prohibition notices after the first visit and had started to act on the improvement notices.

On 13 and 14 October 2014, the HSE invited the company, the director and another manager to provide written submissions, which were returned on 2 April 2015.

"I was looking to progress [the prosecution] with the director and the company because the director had received the information directly and had done nothing [to act on the specialist's recommendations]," said Hassell.

After receiving the report from the HSE electrical specialist on 10 July 2015, he received approval to pursue a prosecution case against the director and company on 12 October 2015.

W E Roberts (Corrugated) requested an adjournment to the original hearing at Medway Magistrates Court in January 2016. At the next hearing on 9 February, the company made an early guilty plea, but the director denied the charges.

"This made things a bit more complicated," said Hassell. "Also, the adjournment meant it kicked over into the new date for the sentencing guidelines -¦ It meant that it couldn't stay in the Magistrates' Court because the offences happened before 12 March 2015. Before then, Magistrates can only fine up to £20,000; their unlimited powers only count for offences committed after 12 March 2015 so the case had to go up [to the Crown Court]."

After the director charge was dropped in August 2016, the case was heard at Maidstone Crown Court on 30 January by H H J McDonald who determined that the company's culpability was high, harm category 1 -- since the seriousness of harm was Level A with a high likelihood of harm.

W E Roberts (Corrugated) had an annual turnover of £13m, placing the manufacturer in the lower end of the medium range for a starting fine.

"There is no decided case to indicate what the judge should do but we agreed with the defence that he should look towards the lower end of that scale because it seemed harsh to fine the company £2.5m [the top of the category range for high culpability]," said Hassell.

"They could have had a £49m turnover [and still faced the same level of penalty] and also the company isn't trading very well -¦ The judge did consider [their financial situation]. The fine has to be proportionate to the means. They are technically insolvent but they are trying to trade their way out."

Hassell said that the judge's lenient penalty reflected the company's financial situation and the improvement measures made at the premises. W E Roberts (Corrugated) have recruited a corrugator specialist to manage health and safety on-site. It has complied with all of the notices issued, which has improved overall management on-site, and trained individual managers to take responsibility for safety in their departments.

"I have told them that they are due a full inspection because we always follow up within a year of a prosecution to look around," concluded Hassell. "Hopefully it will be fine. There's a lot going on and there's dangerous equipment, so we will take it as we find it."