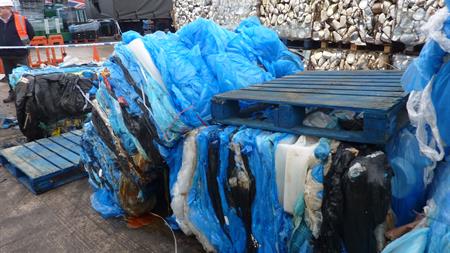 Jacek Adamowicz was a 29-year-old employee of Hitchen Foods, which is owned by the Bakkavor Group. He had been sweeping an aisle between two rows of waste plastic bales in the yard at 10.45am on 4 February 2015 when two bales collapsed. One of them, weighing 723 kg, fell 3 m and landed on him.

Waste plastic packaging had been processed in the onsite baling machine and then stored before removal. The bales had been stacked one on top of another with no interleaving, three-high and between eight- and nine-deep. Each bale was separated by a wooden pallet which, as Health and Safety Executive (HSE) inspector Ian Betley told IOSH Magazine, made the columns unsteady.

He said: "The bales of waste were larger than the pallets so they protruded over. The higher up you went, the more lean there was simply because of the amount of overhang. Some of the pallets were damaged or broken and were subjected to climatic conditions.

Betley served an improvement notice on Bakkavor that required it to review its risk assessment.

The inspector said other defects he identified when he visited the Wigan location included no system for monitoring the condition of the bales and a lack of formal training for employees stacking them in the yard.

He said: "In order for a safe system of work to be implemented, they should have had a system for monitoring the bales, a system for training, a risk assessment and an exclusion zone to prohibit pedestrians entering that area.

"In my view, sweeping up could have been done after the bales had been removed from that area in order to eliminate the risk of people being struck by falling materials."

On 28 April, Judge Maurice Greene fined Bakkavor £2m at Manchester Crown Court, and ordered it to pay costs of £32,595. The company, whose customers include Tesco, Sainsbury's, Waitrose and M&S, had pleaded guilty to breaching s 2(1) of the Health and Safety at Work Act at an earlier hearing. (See the box below for how the judge applied the sentencing guidelines.)

After the accident, Bakkavor updated its risk assessment and replaced its existing stacking method with a pyramid formation, based on guidance from the agricultural industry. It eliminated the use of pallets between each bale and also implemented a monitoring system whereby an employee would regularly inspect the area and assess the condition of the bales and how they had been stacked.

"This was a systemic failure right from the outset," Betley said. "Not only should proper planning have been carried out in relation to the storage and stacking of waste bales, but also a system of work subsequently put in place to mitigate both risks. The company failed on both of these counts with devastating consequences."