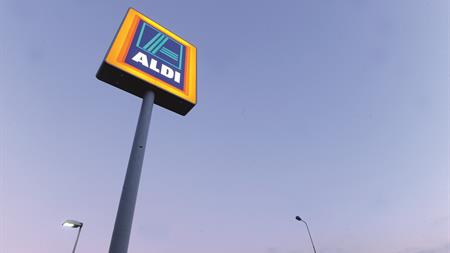 Bruce Hunterfox was in the second week of his new job as a delivery driver on 7 November 2013 when the accident happened. He was manoeuvring an electric-powered pallet truck into a tight space in the food chiller at the discount supermarket chain's Somercotes store in Alfreton, Derbyshire.

He was preparing to move pallets to create room for a new delivery when the truck rolled backwards over his foot, fracturing all his toes. He was off work for six months after having two toes surgically amputated and his foot restructured using pins.

The investigation by Amber Valley Borough Council (AVBC), which brought the prosecution, found that Aldi did not offer standardised training programmes to new pallet truck operators. Instead the workers were expected to shadow experienced members of the team for a week before working alone.

During the seven days when Hunterfox was observing another Aldi delivery driver, he did not visit the Somercotes store and had never operated the Jungheinrich EJD 220 electric pedestrian stacker he was using when the accident happened.

Natalie Osei, litigation solicitor at AVBC, said: "We established that there wasn't any formal training for dangerous items like pallet trucks.

"The model [Hunterfox] was using that day was larger, had a bigger turning circle, was able to go faster and took longer to stop."

She explained that the operator thought he had stopped the pallet truck when it rolled backwards, but it was still running.

Hunterfox has returned to work, but his injuries "have left him with pain that will have repercussions in years to come and can be considered life-changing", the council said.

Osei said Aldi has overhauled its training procedures and now provides all its agency workers and staff with structured guidance on operating electric pallet trucks.

During the sentencing at Derby Crown Court, Judge Peter Cooke noted that previous incidents should have prompted Aldi to improve operator training sooner.

Osei told IOSH Magazine there had been "a few others over a period of years" but the judge was referring specifically to an incident in February 2013 when a pallet truck operator fractured his foot at a store in Essex.

In May that year, a health and safety officer for the local authority issued Aldi with a warning and referred it to the HSE guide, Rider-operated Lift Trucks: operator training and safe use (bit.ly/2w3ENOl).

After the November incident, however, AVBC's investigation revealed that the company had failed to improve its training procedures and on 7 April 2014 served an improvement notice.

Aldi pleaded guilty to breaching ss 2(1) and 3(1) of the Health and Safety at Work Act in December last year. It was sentenced on 14 July and fined £1m. (See table below for the judge's application of the sentencing guidelines.)

AVBC's portfolio holder for housing and public health, David Taylor, said: "The level of fine reflects the seriousness of the failings within the company.

"This investigation and outcome will hopefully result in a renewed focus by Aldi to ensure that standards are maintained to ensure employees receive adequate protection from risk of injury."

Last year the company was fined £100,000 after an unsecured smoking shelter at its Darlington distribution centre blew over and struck an employee who was on a break.