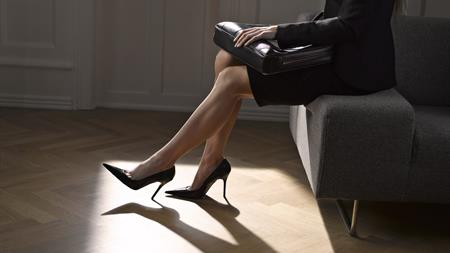 The motion was proposed by the Society of Chiropodists and Podiatrists (SCP) which noted companies can legally require female employees to wear high heels in workplace dress codes.

The SCP said problems associated with short-and long-term injuries that are caused by inappropriate footwear are still prevalent in the workplace, despite TUC guidance in 2009 on the subject.

A survey of 2,000 people in the UK by the College of Podiatry in 2013 revealed self-reported foot problems in 90% of respondents, SCP professional officer Katie Collins told congress delegates. She cited a study by researchers at Stanford University, which found that walking in high heels puts the knees under additional strain which could lead to arthritis.

Collins said the issue is "still alive and kicking", highlighted by the national news coverage in May this year after receptionist Nicola Thorp was sent home from work by consultants PwC after she refused to wear high heels.

"In manufacturing, building and construction and many other workplaces, appropriate footwear is mandatory for safety purposes. So why not require the same standards in other industries as well?", Collins asked.

She said that energy supplier E.ON reported a rise in accidents during the summer months as an increased number of staff wore flip-flops and sandals to work. In one case, an employee was wearing flip-flops when she caught her toe underneath a filing cabinet and lost her nail.

"Congress is not calling for a ban on high heels but calling for common sense and fairness in the workplace. Women should not have to risk their safety to comply with standards," said Collins.

"Congress therefore calls on the TUC and affiliated unions to work closely with the SCP and its members to educate employers and employees on the dangers of inappropriate footwear."

Penny Robinson, speaking on behalf of the general trade union GMB, which supported the motion, said the cause of women in the workplace can be advanced by prime minister Theresa May.

May is well known for her extensive shoe collection and love of footwear and Robinson said the PM should "make a point of wearing pumps, flats and comfortable shoes for meeting EU leaders" and "let the media see that you can be the most powerful woman in the country without wearing designer shoes to meet men's expectations".

Frances O'Grady, general secretary of the TUC, said: "We need common sense when it comes to dress codes, not outdated sexist policies. It is ridiculous that so many employers still insist their female staff wear high heels and makeup in 2016. "Regularly wearing high heels increases wear and tear on knee joints and can lead to back problems. They should be a choice, not a condition of the job."

Speaking on BBC Essex Radio yesterday (13 September), Nicola Thorp said she was pleased the TUC was discussing the matter.

"Businesses lose around £250m a year through compensation for injuries at work that happen to women because of high heels," she said, "so it's great that it's been spoken about and taken seriously because so many times people say, 'Oh you're just complaining because you want to get your own way'. No, we're campaigning for equal treatment in the workplace."

The need for appropriate footwear in the workplace has attracted significant public interest. A parliamentary petition, Make it illegal for a company to require women to wear high heels at work, has gathered over 150,000 signatures. The government's petitions committee launched an enquiry and this could lead to a debate in parliament.