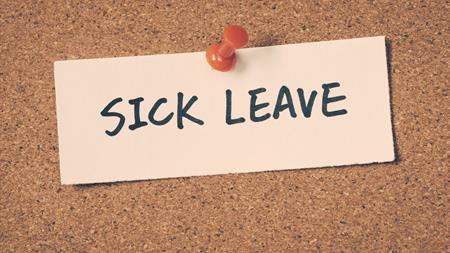 The average number of sickness absence days taken by UK workers has almost halved from 7.2 days in 1993 when records began, though the rate started to fall overall from 3% in 1999.

Absence levels varied between occupations, from a rate of 0.9% for managers and senior officials to 2.8% for those working in caring, leisure and other service occupations.

The ONS noted that the drop in rates could be due to an improvement in healthy life expectancy but may also be attributed to an increase in "presenteeism" (people attending work when sick). It added that rates in the private sector could be lower "as workers are less likely to be paid for a spell of sickness."

The sickness absence rate is highest among large organisations with more than 500 employees. In 2017, this stood at 2.3% compared with 1.6% in organisations with fewer than 25 staff. The ONS suggested those who are part of a smaller workforce may feel more pressure to make up any lost hours.

Employees have a higher sickness absence rate than self-employed workers (2% compared with 1.3%).

"Minor illnesses", including coughs and colds, was the main reason given for sickness absence and accounted for more than a quarter (34.3 million days) of the total number of days lost in 2017.

For the second successive year "musculoskeletal problems", including back and joint pain, remained the second most common reason for sickness absence and attributed to 28.2 million days lost. They resulted in 20.8% of 50- 60-year-olds and 18.7% of 35-to 49-year-olds being off work.

In the five years between 2010 and 2015, musculoskeletal problems were responsible for the most number of days lost through sickness absence across the UK workforce.

A further 14.3 million days were lost last year due to stress, depression and anxiety. There has been an increase in the proportion of younger workers aged 25 to 34 who attribute their sickness absence to mental health conditions, rising from 7.2% in 2009 to 9.6% in 2017.

There is also a divide between the sexes in sickness absence; the sickness rate is 1.5% for men and 2.4% for women.

The statistics show that men take more time off with musculoskeletal conditions (28% compared with 18.4% of women), while women are more likely than men to cite mental health conditions as the reason for sickness absence (8.1% compared with 5.7%).

The lowest rate of sickness was recorded in London (1.1%) while workers in Wales had the highest rate at 2.7%.

Frances O'Grady, the TUC general secretary, said: "It's time to ditch the myth that UK workers are always throwing sickies. The reality is that people are more likely to go to work then ill than stay at home.

"If someone is poorly, good employers will encourage them to rest up and get better. UK workers already put in billions of pounds worth of unpaid overtime every year. They shouldn't have to battle through illness as well."

The ONS referred to the latest Health and Wellbeing at Work survey, carried out earlier this year by the Chartered Institute of Personnel Development and insurance firm Simplyhealth, which found 88% of the 1,000 employers that responded had observed presenteeism in the past year. This is up from 72% in 2016 and 26% in 2010.

The survey also found that 69% of respondents said "leaveism" (people working during annual leave) had occurred in their workplace over the past year.