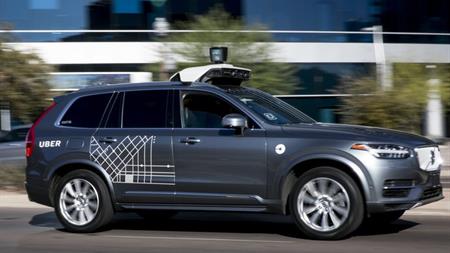 The Volvo XC90 SUV was in autonomous mode and there was a safety driver behind the steering wheel when it hit Elaine Herzberg, 49, on Sunday evening (18 March). She later died in hospital.

Video footage of the crash shows Herzberg walking with her bicycle when she suddenly stepped into the road, outside of a zebra crossing. The car was travelling at about 65 kph and did not appear to slow down as it approached her.

The incident is believed to be the first fatal crash involving a self-driving vehicle and a pedestrian in the US.

In May 2016, a Tesla driver became the first motorist to be killed in such a vehicle when his Model S sedan crashed into a lorry in Florida while the Autopilot technology was enabled.

The National Transportation Safety Board is investigating the collision and will "address the vehicle's interaction with the environment, other vehicles and vulnerable road users such as pedestrians and bicyclist", it said

In a statement on Twitter, Uber said: "We're fully cooperating with @TempePolice and local authorities as they investigate this incident."

The company's CEO Dara Khosrowshahi added: "We're thinking of the victim's family as we work with local law enforcement to understand what happened."

Uber has now halted all self-driving tests across its Advanced Technologies Group locations in Phoenix, Pittsburgh, San Francisco and Toronto.

Its driverless cars are fitted with a series of sensors, including radars, laser scanners and high resolution cameras, to help it map its environment. "Right now we're focused on getting the technology right and ensuring it's safe for everyone on the road -- pedestrians, cyclists and other drivers," according to its website.