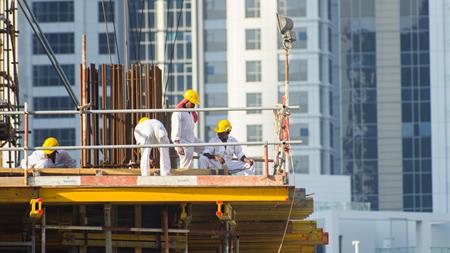 Workers such as those on construction sites, security guards and delivery drivers will be forbidden from working outside between 12.30pm and 3pm, until 15 September.

The Ministry of Human Resources and Emiratisation (MOHRE), which announced the ban, told IOSH Magazine the summer timings "do not reduce employees' working hours". Instead, the working day will be divided into a morning and evening shift, totalling eight hours.

The mandate has been in place in the UAE since 2004 to ensure workers remain safe during the hot summer months, when temperatures in the country can reach 45°C.

Emergency work on electricity, gas and water supplies is omitted from the hours ban. Work on any other systems that, if delayed, may cause danger, damage, malfunction or loss, is also excluded, along with handling poured concrete.

Businesses that violate the rules will be fined Dh5,000 (£1,017) per employee found working during the break and could receive a maximum penalty of Dh50,000 (£10,175) if many workers are involved. In addition, MOHRE said it would also consider temporarily stopping the company from operating.

For the next three months employers are required to give workers a clear schedule of their daily work hours and provide them with a shelter they can use throughout the 2.5-hour rest period.

For those working during these hours, employers must provide cold drinking water, air conditioners, sunshades and first aid.